Cycling in & around The City By The Bay

Just back from just over 2 weeks in beautiful San Francisco where we hired some rather dodgy hire bikes (for 2 weeks you have to be cost effective and most tourist places hire to people for one day and cost a lot) for getting round the city and transporting ourselves to some wider Bay Area places.

This post is about my musings on cycling in another part of the world and how I found it, my next will be more focussed on the beautiful scenery and places we visited.  I'm currently zombified after a delayed flight, being rerouted back via extra airports, and my suitcase is still on it's holidays, so sorry if I ramble. 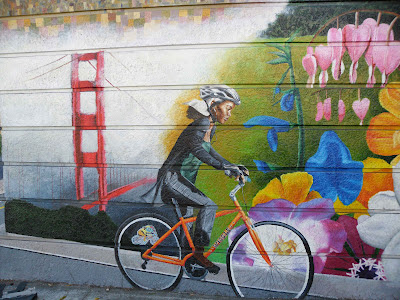 The thought of cycling in a busy city, on the wrong side of the road, in a country where you aren't 100% au fait with the traffic laws is a little intimidating when you're collecting your bike. But yesterday whilst trying to sleep on the plane, I realised that for 2 weeks I've been spoiled with a whole different cycling culture and attitude from the general populous.  The prospect of returning to the roads here gives me a sinking feeling.

Both cycling in the city itself with it's grid pattern streets and outside the city on faster more twisty roads felt much safer and easier than I could have ever hoped it would do and after just one whole day out on the bikes covering a 50 mile route, Stephen & I both remarked at how we both felt much safer than cycling in England on the roads we're used to that have traffic laws we understand. That should really speak volumes to road planners, campaigners and cyclists in the UK. 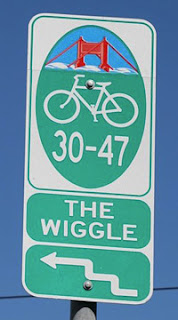 We generally followed routes published in the Cycling & Walking map of San Francisco which shows the best routes for cyclists to take when navigating the city - it avoids the busiest and hilliest roads and showed me to The Wiggle - my favourite bit of bicycle roads marking design by far - green boxes painted on the road lead you around The Wiggle and its certainly a mini bike highway. We sat at a brilliant cafe, Bean There and watched cyclists using The Wiggle as we supped coffee and ate pumpkin pie. Brilliant for people watching and also great for seeing the variety of bikes and human powered wheels that people use as their prime method of transport to get about the city limits.


Afew points of note that really stand out to someone visiting:
These included:
Bike Lane - No Parking
Share the road
Bike's have full use of lane


Another thing I noticed was that drivers on the whole do not seem to speed as prevalently as they do in the UK.  Which when you really think about, is a huge culture difference. US roads are much wider, straighter and visibility is therefore much better, yet people seem to drive much more sensibly.


I never once felt like I was about to be clipped by a car over taking me.  Even in rush hour times, it felt just as safe.

The whole attitude to road users and pedestrians felt much different to here. Depending on lights, everyone has equal priority be it on foot, on human powered wheels (and we saw plenty of skate boarding and roller skating people in the bike lanes too) or petrol powered wheels and I think that is a real key in why things are so much different. 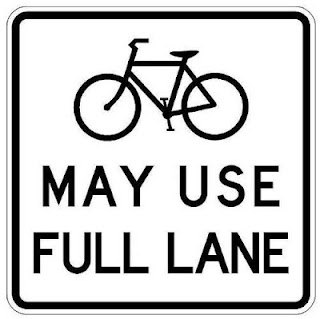 Here most drivers' attitude is that they wrongly think 'road tax' means that they pay for the roads themselves and therefore have priority.  All tax payers pay for roads, they are a called public highways.


Hiring bikes for the holiday was such a positive experience. San Francisco has loads of cyclists and this has increased exponentially over the last few years. The great work done with the Bicycle Coalition has brought a positive public image to cyclists and we were very grateful for their city cycling map resource.  Much like Sustrans here, lots is being done to promote the idea of every day cycling, though here cycling is still very much seen as a leisure pursuit rather than a valid form of transportation.

Transport ministers, road and town planners really should do some travelling, get on their bikes and see how other places can make things work.
I know in the UK our roads arent built for the volumes of traffic that they carry and not much can be done about that. But a change in some licks of paint, some added signs for cyclists and drivers and maybe we could see an eventual shift in the attitudes of traffic. San Francisco has shown it can be done, it just takes some time & patience.
I believe in merits of both on road cycling and also for separate bike lanes. Functionally for me, cycling ten miles to work has to be largely by road for it to be practical, but I love the off road network that Sustrans have created for my leisure riding, to ride side by side with Stephen and not have to even think about traffic.

Alas when Monday comes, I'll have to be up & set off an hour early to beat the worst of the traffic to cycle to work more safely & when I cycle home, I will be forced to ride on the pavement down a grid locked A-road where you literally can not cycle past the waiting cars on the road without clipping them with your bike.  I'll be passed with inches to spare at speeds that are far from sensible and see cars run red lights at every set of lights I pass. Back to reality.