Enter a new decade as you mean to go on! Leading a 28 mile off road ride in beautiful sunshine.
I celebrated with friends with a meal on the Friday night, so I had all of saturday to recover any roughness, to be fully sober for sunday's ride.
I attached my balloon to my bike and set off to the meeting point. Cheers of Happy Birthday followed in my wake. Lovely. 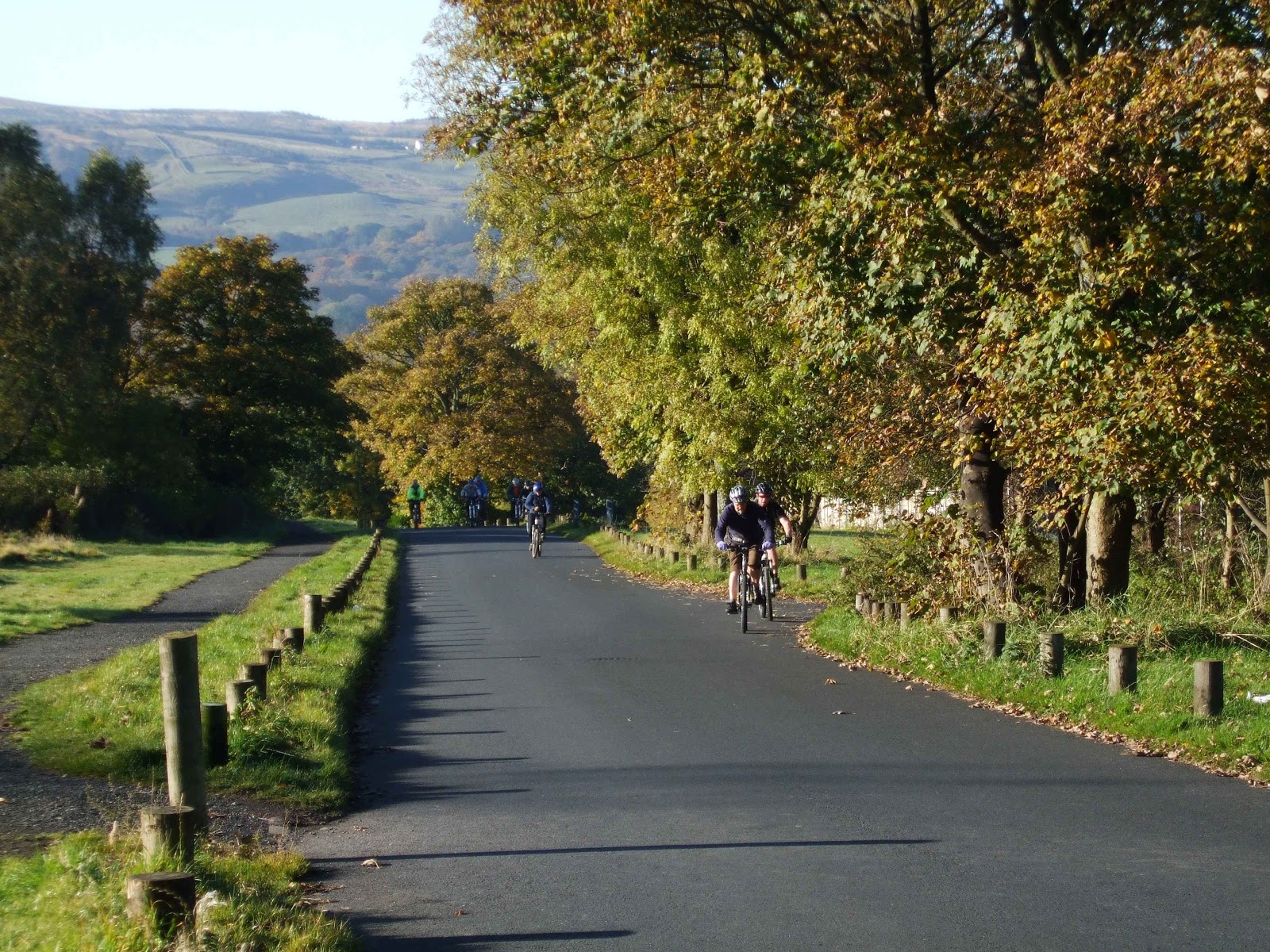 I'd warned the Rough Stuffers that this ride would have some hills. Some real beauties. We set off straight up hill out of the park for a warm up, followed by a further 7 miles of ascent over the moors on the Gorple Rd packhorse trail. Beautiful views stretched as far as the Yorkshire Dales Three Peaks in the clear skies. A rarity where we live, usually this vista is just loads of clouds, or else just rain. 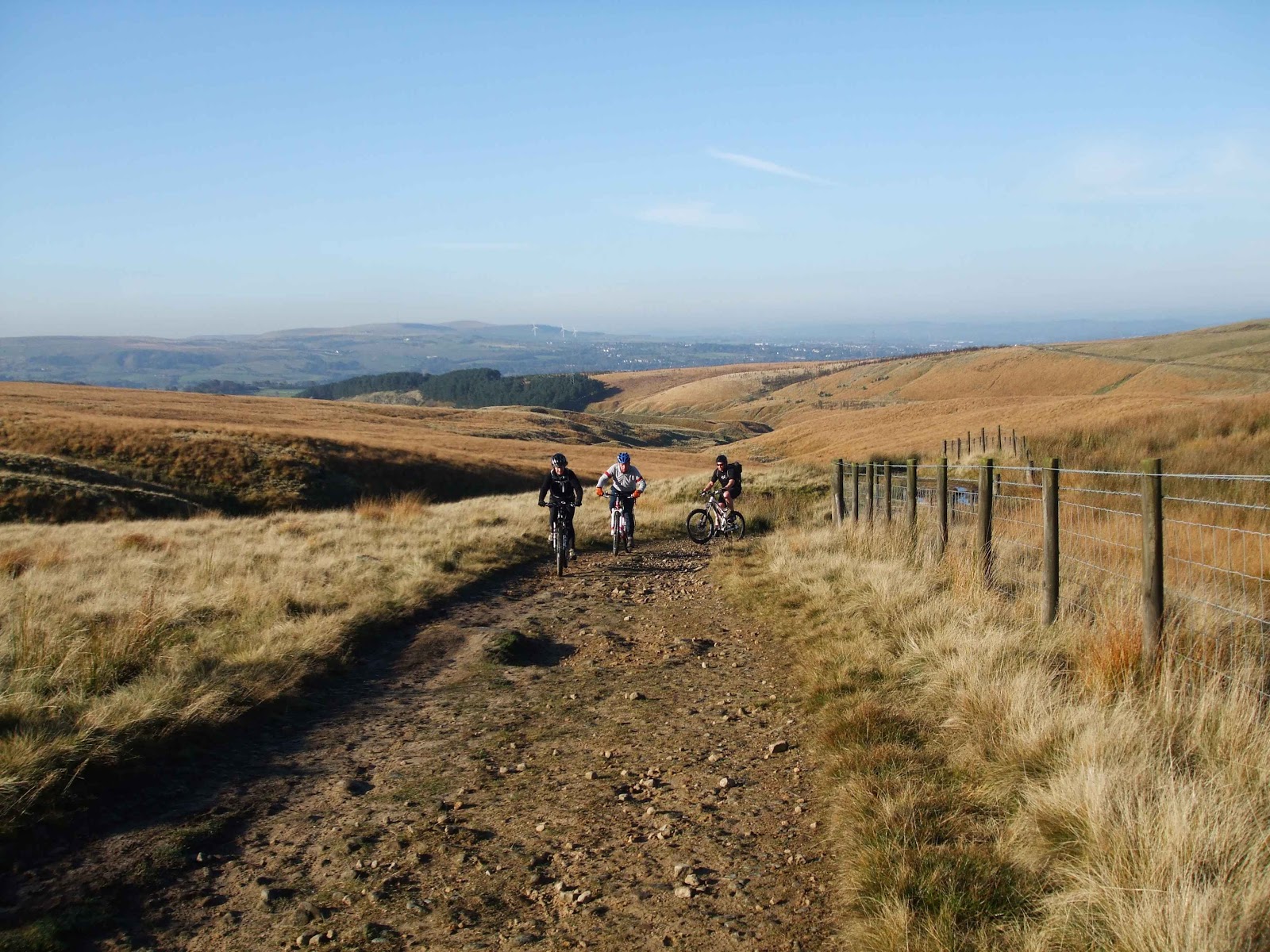 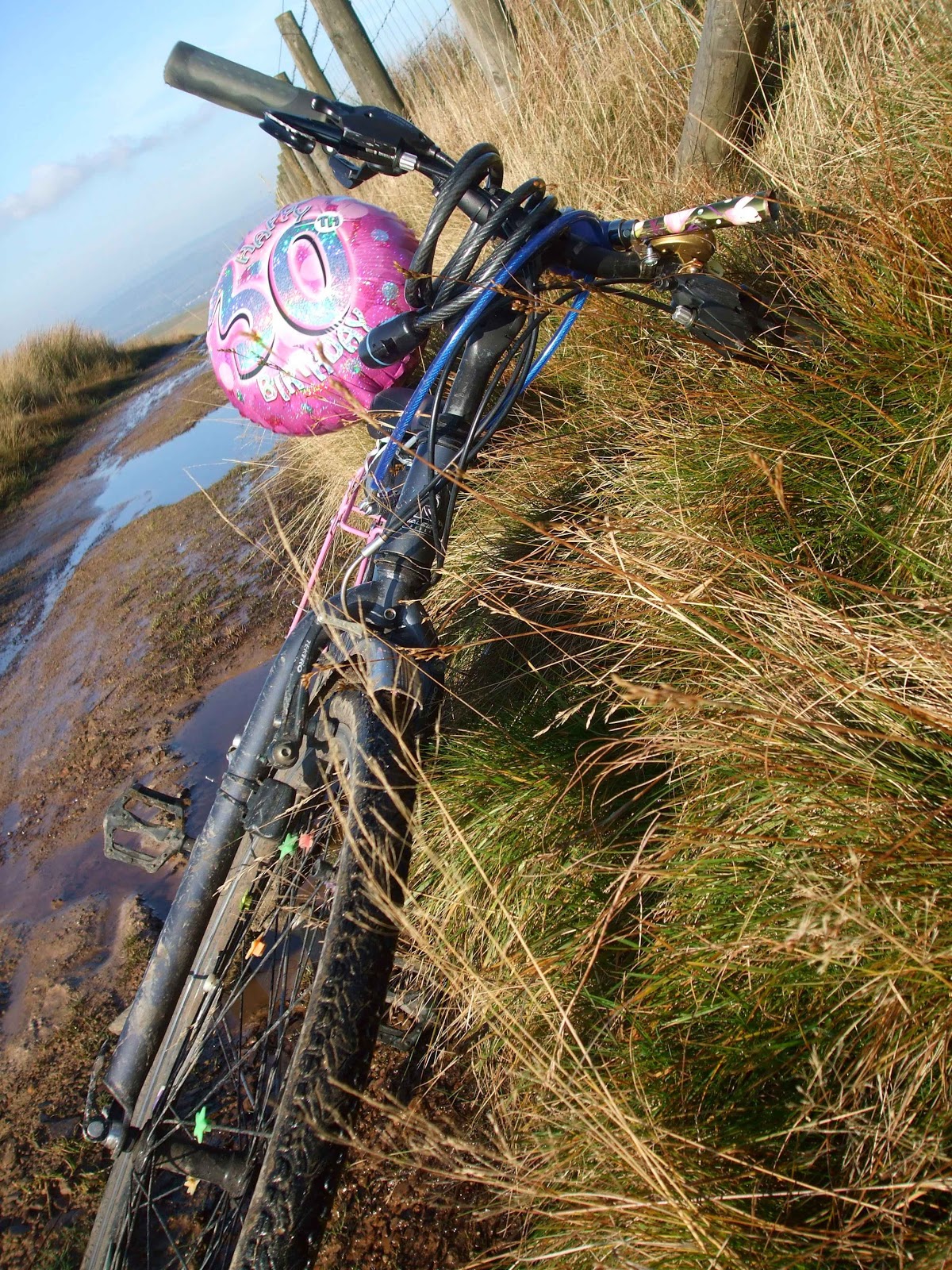 We had a breather at the top by Gorple Stones overlooking Gorple Reservoir in anticipation of the rough descent towards Widdop Res. The braver of us zoomed ahead, I had a bit of a chat with John on the way down, so we took things a bit more steadily. Lovely to hear of tales of someone elses Dad bringing them over to Widdop in their youth. This place is very special to me and is where my Dad's ashes were scattered. 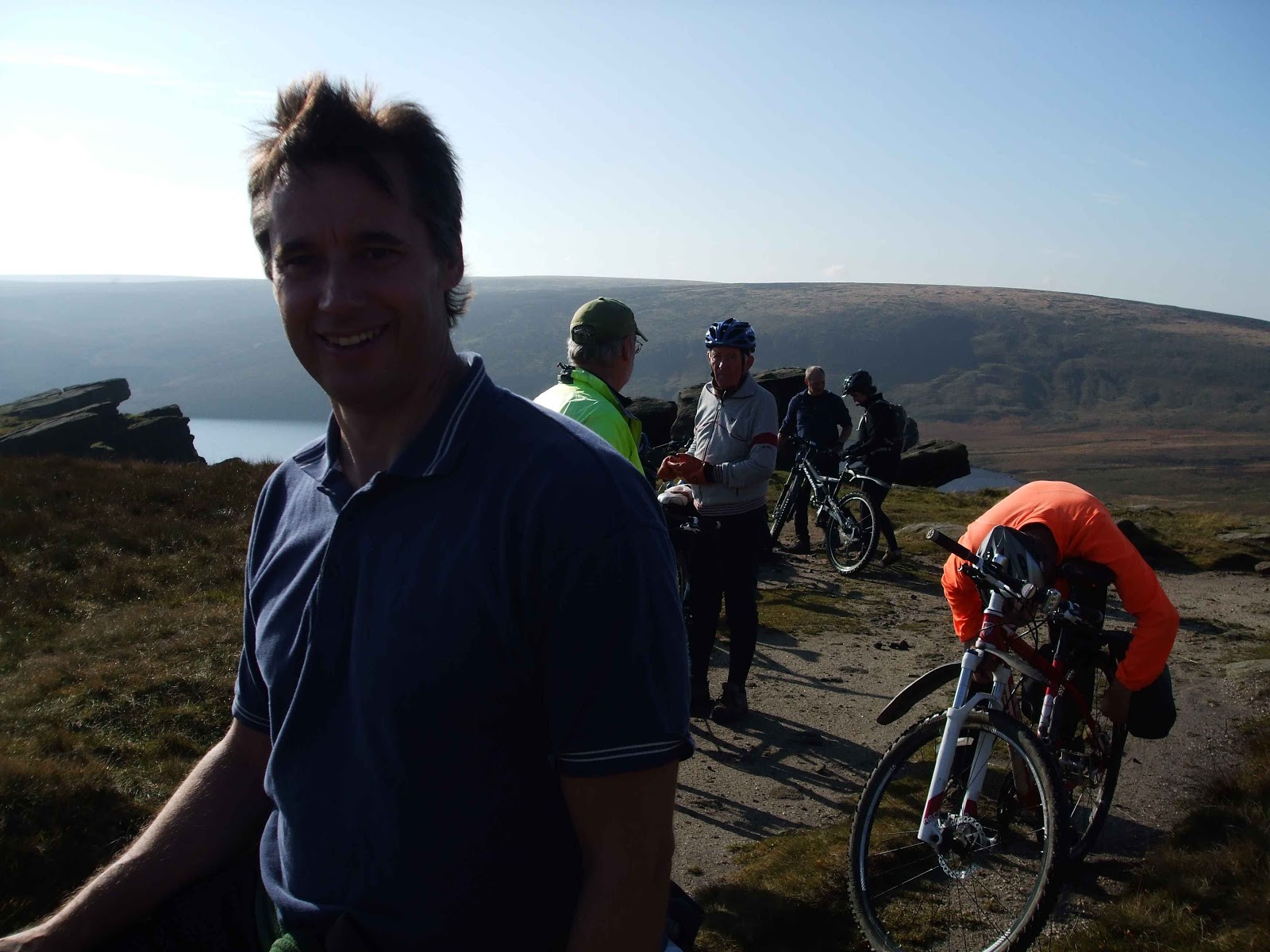 Some undulating hills brought us to the tops of the National Trusts Hardcastle Crags. Beautiful autumn colours below. We didnt visit the site today and probably a good call too since when we rode past the car park, it was so busy people were being turned away. I will save the usual slice of Yorkshire curd tart that I eat there, for another time.
We descended to Hebden Bridge to the only mishap of the day. Stephen's handlebar caught my balloon and one loud bang later, it was no more. 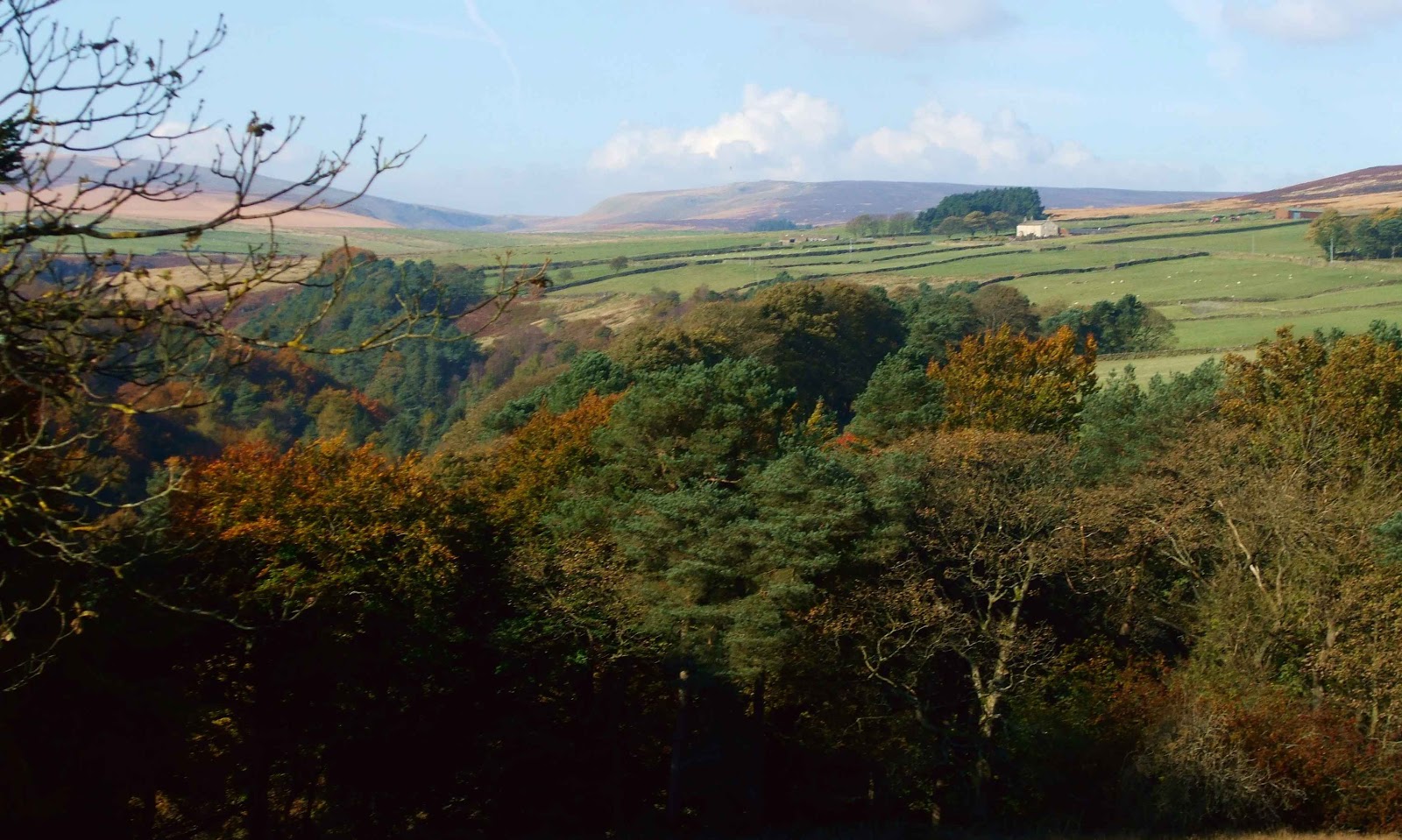 We lunched in the newly reopened park life cafe. Veggie hotdogs for your birthday lunch are spot on! I also completed my 5th brew of the Coffeeneuring challenge!! Sitting in the shade was quite cool and for the next few shaded miles along the canal, I picked up the pace for some warmth. The canal was still full to bursting following the recent flooding and we cycled through some gushing overflows on the towpath. 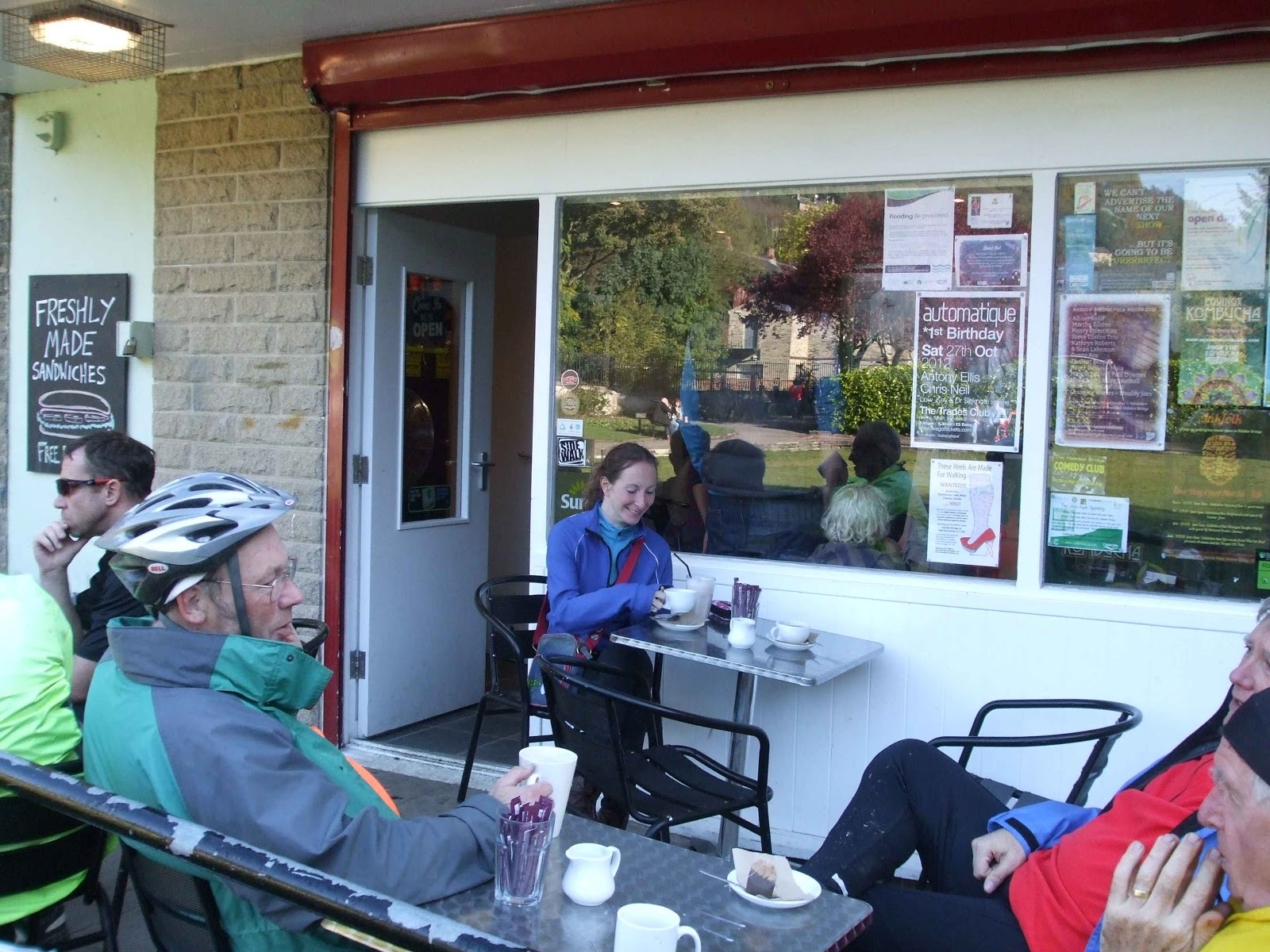 After an easy couple of canal miles to digest lunch, the real challenge began. A long steep climb from the bottom of the valley at Todmorden up, up, up onto the moors, passing Dobroyd Castle below and some spectacular views. We took it easy and if there was any cussing of my name, I didnt hear it.
620 feet of ascent in 2 miles. Slightly easier than the route I took last time on a parallel road up the hill. 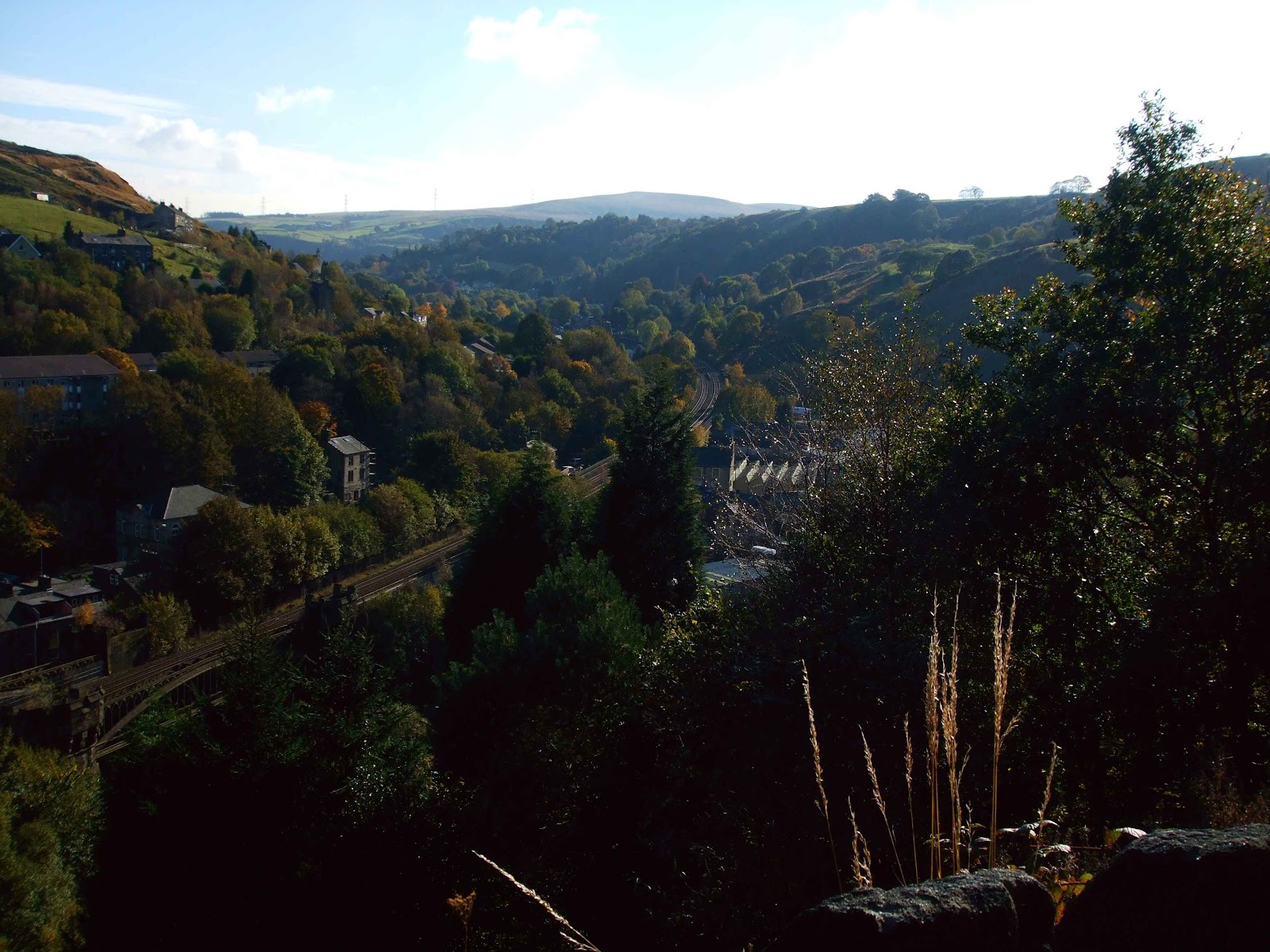 A boggy bridleway and a swooping downhill later and we were on the last leg of the journey back to base.
One of the rider's, Frank must have really had a great ride - 'You should have a birthday every week'. That really was a brilliant compliment.  An unexpected birthday card from Irene who couldnt make the day,  delivered by her husband, John was really touching and I hope she's better soon.

The first big ride I've done seemed a great success. Really looking forward to my next one.  A fantastic birthday! 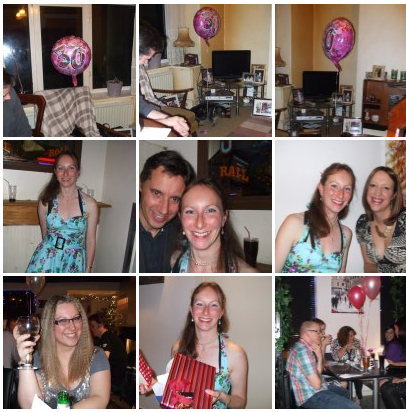 and Geoff's pics of the day 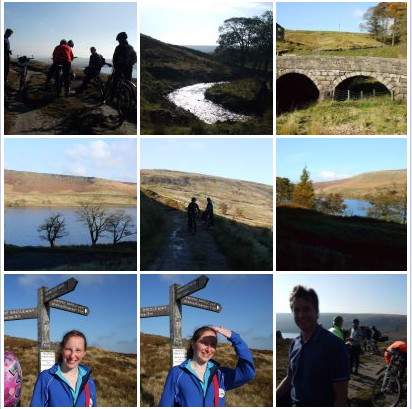