The snow arrived, just in time for our first weekend tour of the year. When I booked it, I'd just kept my fingers crossed that it wouldnt rain!
My goal for this year is at least one bike tour per month. Getting used to hill peddling with loaded panniers is going to be my least favourite part if this weekend has shown anything.

Windermere bound by train, after a bit of a false start we got there. Seems home in the Pennines have had more snow than the Lake District, but the national park had plenty enough of the white stuff to look stunning and the view on the road up to the hostel was picture perfect.


I'd planned to use a fellow Rough Stuff member's route for our first day of riding that would take us to Grizedale Forest.  We set off to the ferry to cross Lake Windermere and to the start of the route. 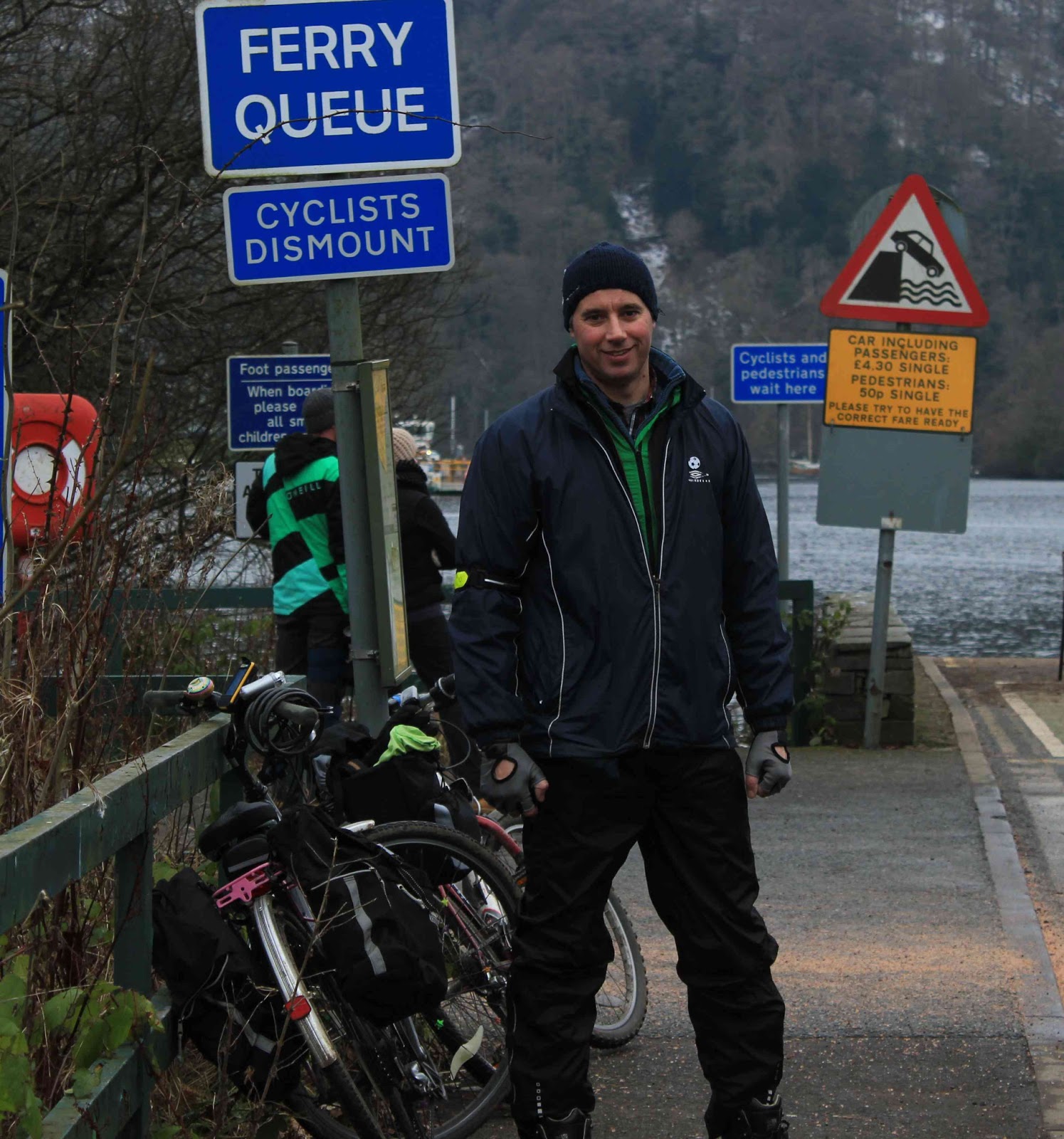 Despite the snow and cold, the roads were fine and felt safe, however as soon as we hit the first bridleway, we knew the ride would be a challenge - ice and compacted snow made for technically challenging riding, which was made even more difficult with loaded panniers - especially on the inclines. Carrying multiple bike-locks and flasks really weighed me down - after a winter of less riding than usual, my thighs were feeling it - something very unusual for me.

After a brew stop beside Esthwaite Water, we ascended into the forest. Rising at points, but mostly pushing. The path that seemed most logical to cycle up was the path that any water had descended the route and had, of course iced up.  Lifting my front wheel over rocks was incredibly tricky with the panniers threatening to upturn my bike backwards... 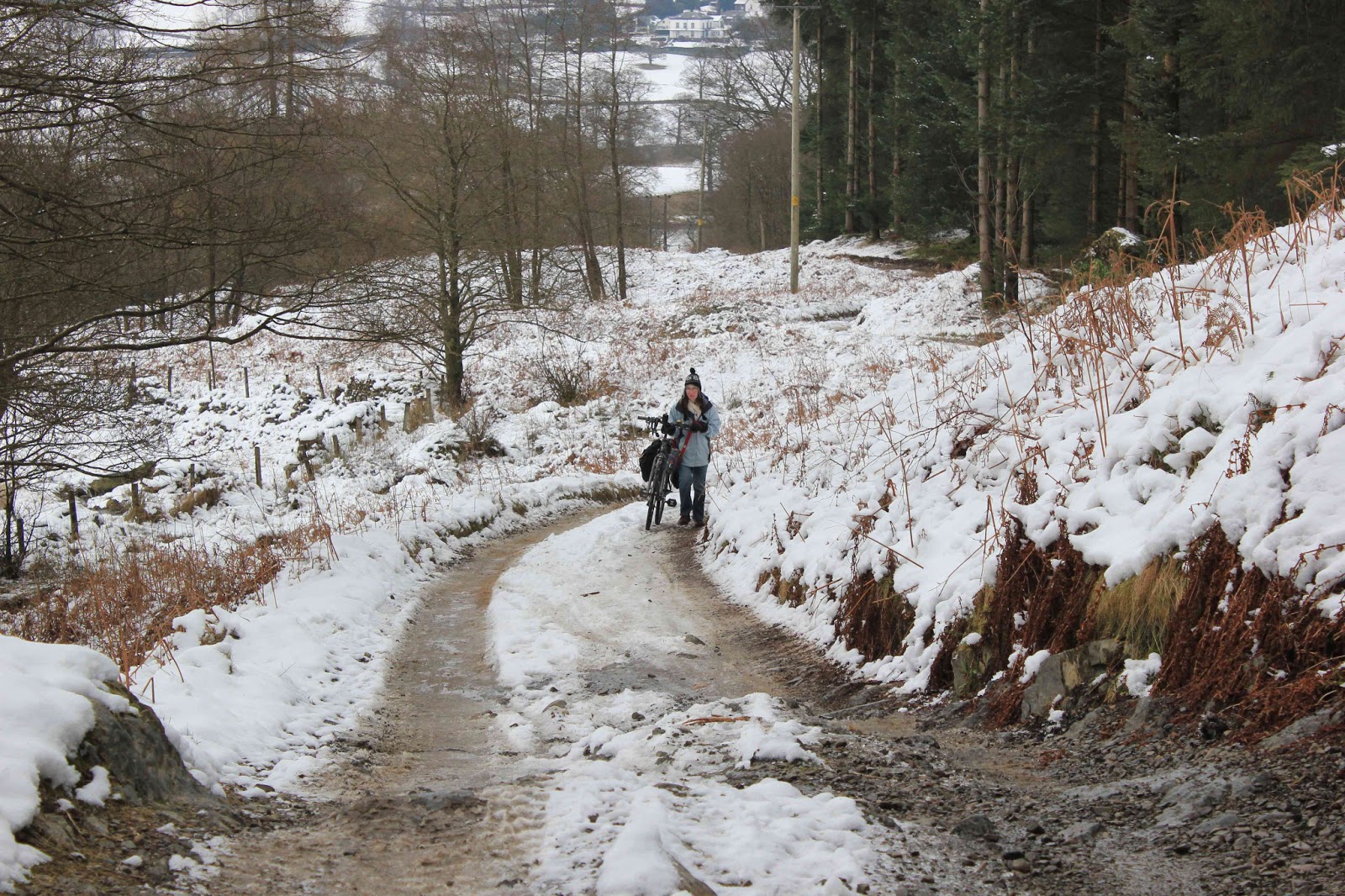 But we made it to the top and thankfully less icey and more snowy conditions lay ahead. And Stephen managed to successfully get through an unexpected 10 foot stretch of foot deep ice water without having to put his foot down, phew. A slow descent to the forest cafe had me giggling with every slide.  It took some significant concentration to stay up right. But it was great fun!
We pretty much had the forest to ourselves. Eventually we passed one other couple on bikes and a couple of dog walkers.
We had taken far longer to get to the brew stop than we'd imagined, and at only 3:30 the skies were getting dark fast so we cut the route short and headed back to the ferry via the fun, undulating road through Hawkshead village.
The ride back to the hostel was mainly on completely unlit roads - we adopted some weird technique with the handlebars to scan the road for curbs, potholes and corners.
Windermere YHA does cooking, so thankfully someone else cooked whilst we prepared the room. Chilli and a small glass of wine later and I was out like a light at 9:30. And the first time Stephen says he's ever heard my little snore.

On Sunday, we left our gear at the hostel and went for a walk down to Brockhole Visitor's Centre for breakfast.  It was a beautiful view from the table. 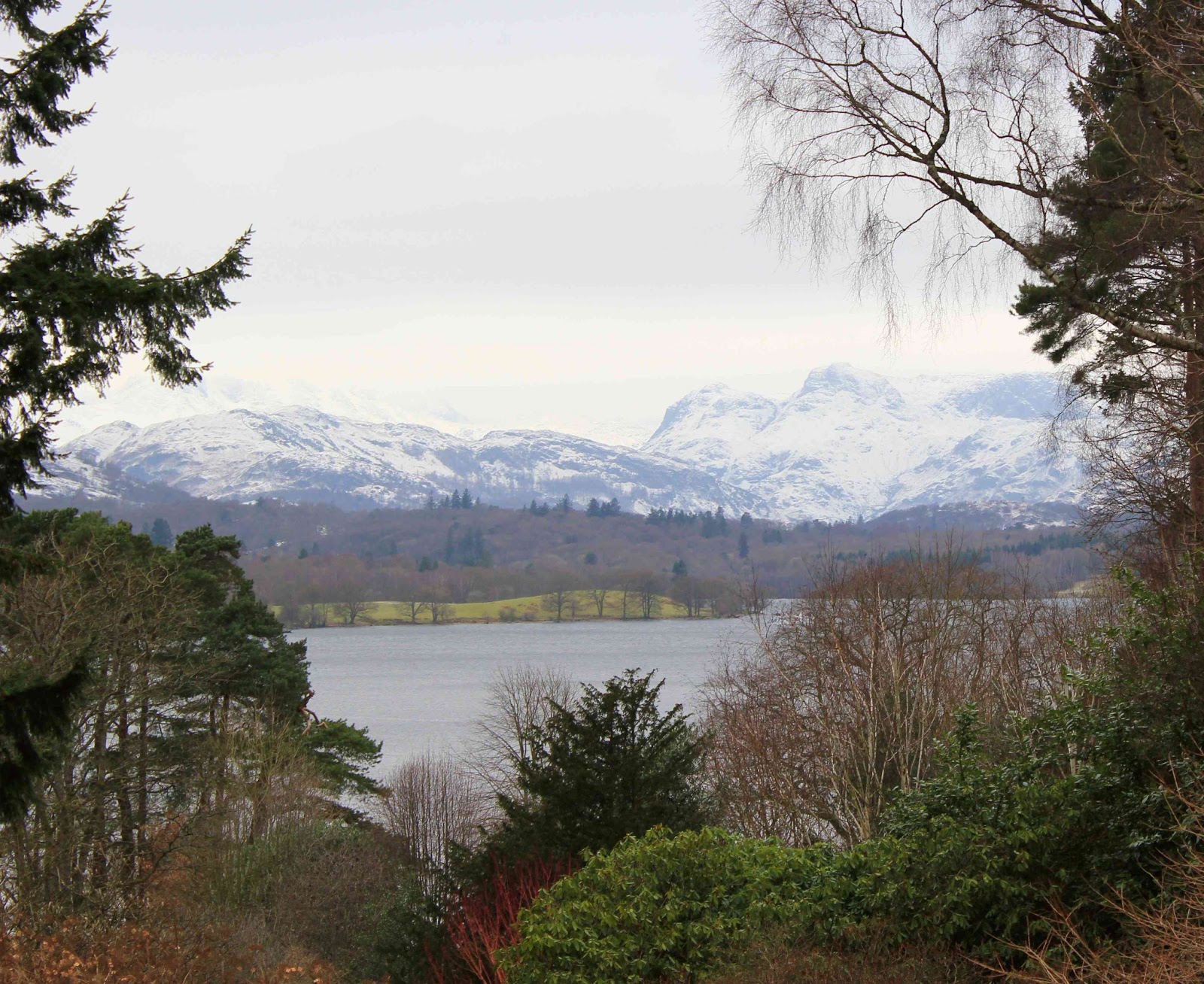 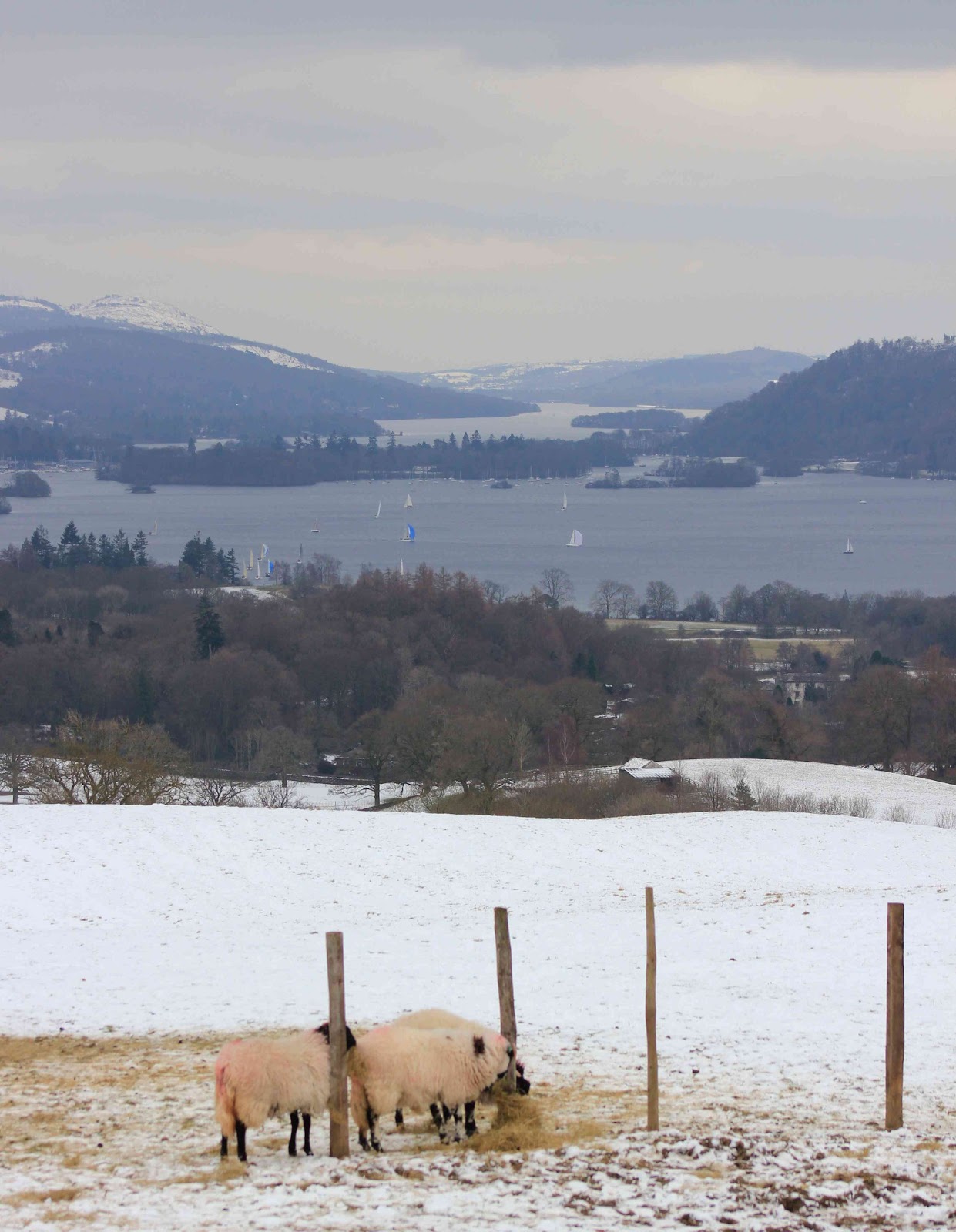 Eventually we reached Troutbeck village which had stunning views towards Kirkstone Pass - the white hill tops merging with the wintry skies. 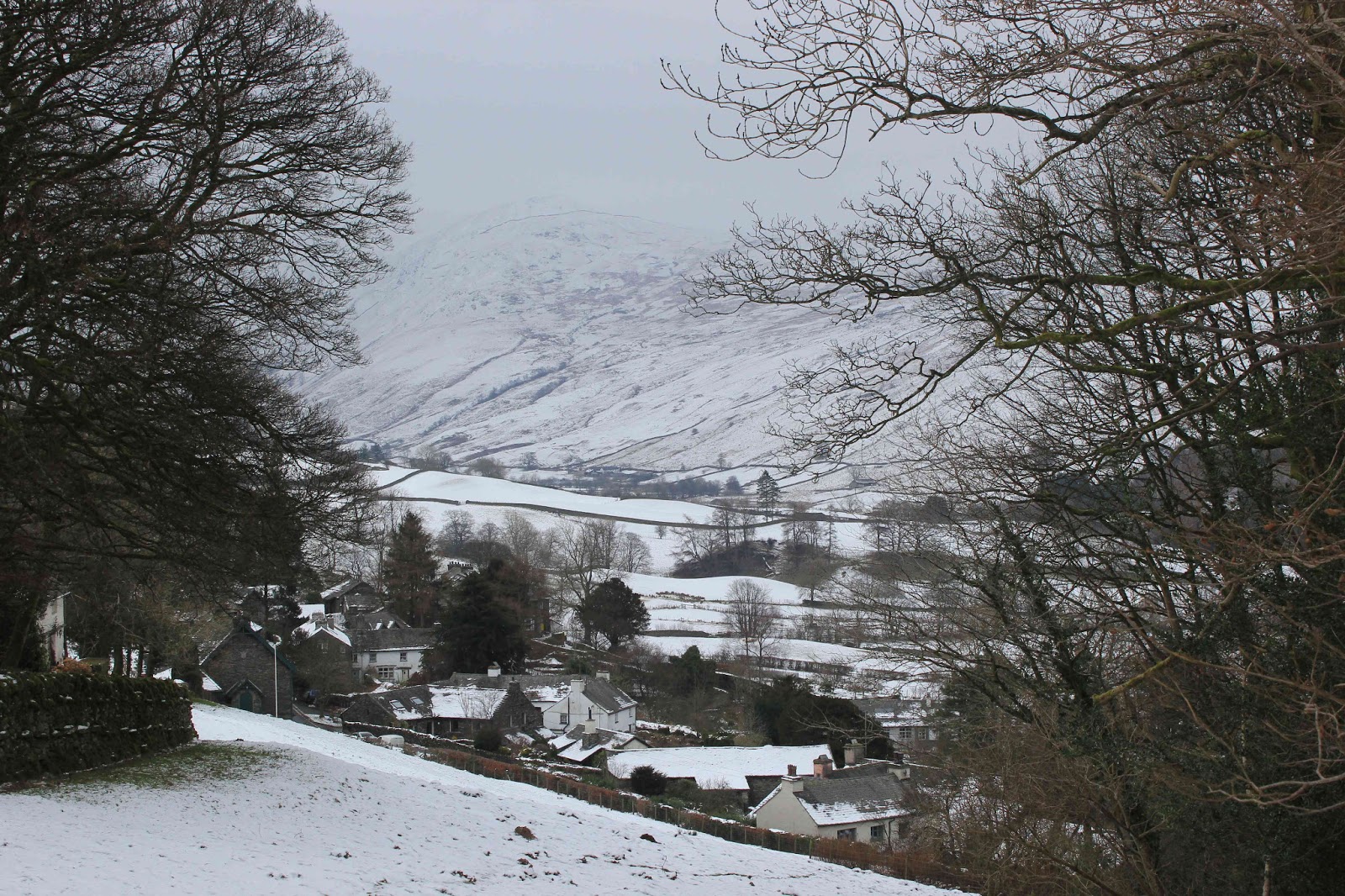 Across the valley there was a field littered with dozens of children playing on sledges. You could see the cars parked on the road behind in a long snake and a car even stopped asking for directions of how to get to 'where all those sledges are?!'


We disturbed an eagle which flew afew feet alongside us, sadly we werent quick enough with the camera to capture it, you'll just have to take my word that it was beautiful and very majestic and the loveliest way to finish off our walk as we turned the corner to the hostel.
One last look at the view before we headed back home.