The sun was in full force for the next few days of riding. We set off from Llangurig heading southwards following the course of the River Wye as it traversed many smaller valleys. This made for stunning cycling with the view changing completely every few miles. Although we were following the river, the roads rose and fell along the sides of the valleys which was a challenging start after the previous day's massive climbs. But with a crystal clear blue sky & an early start we were both relishing the rollercoaster roads. 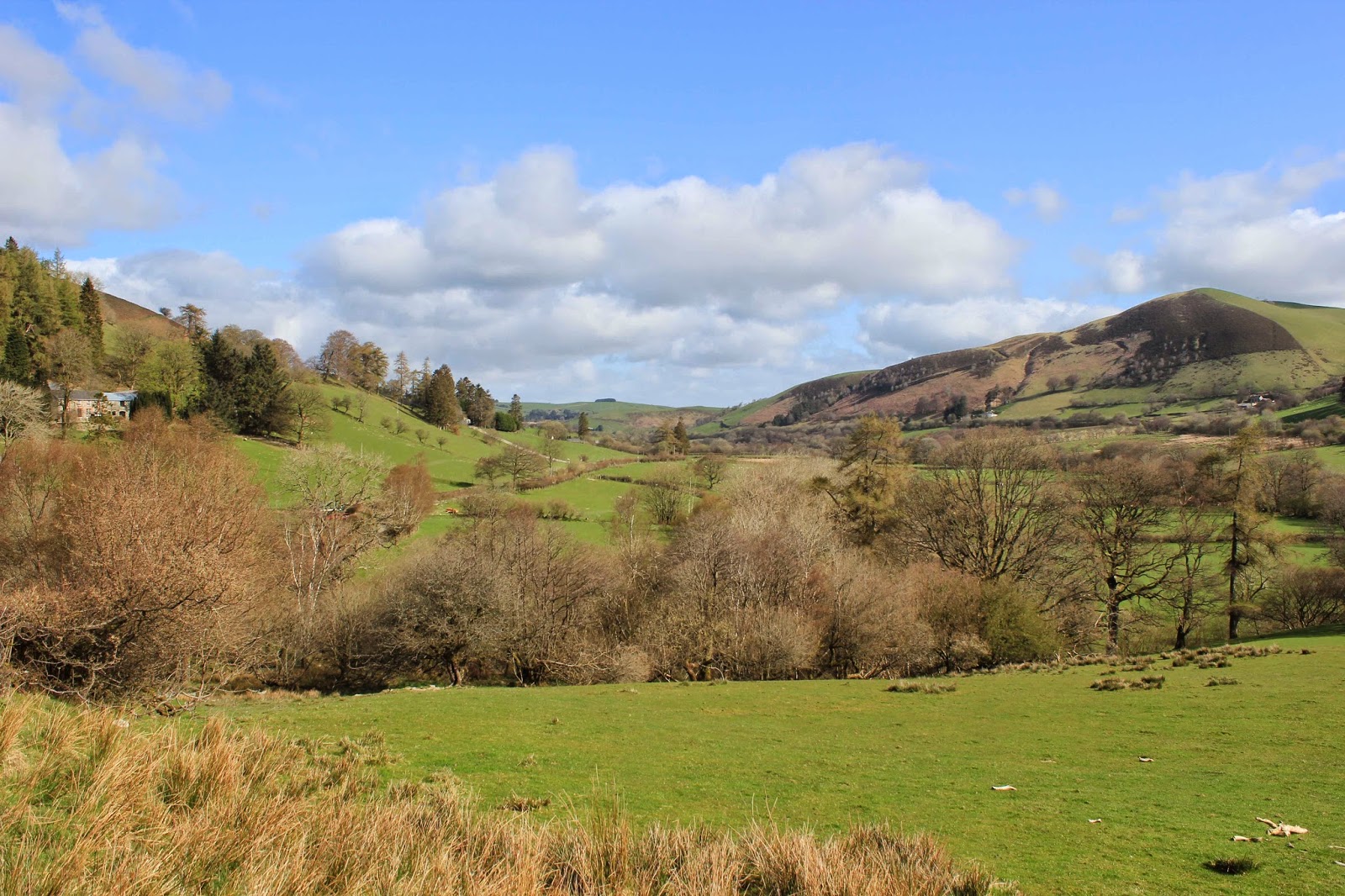 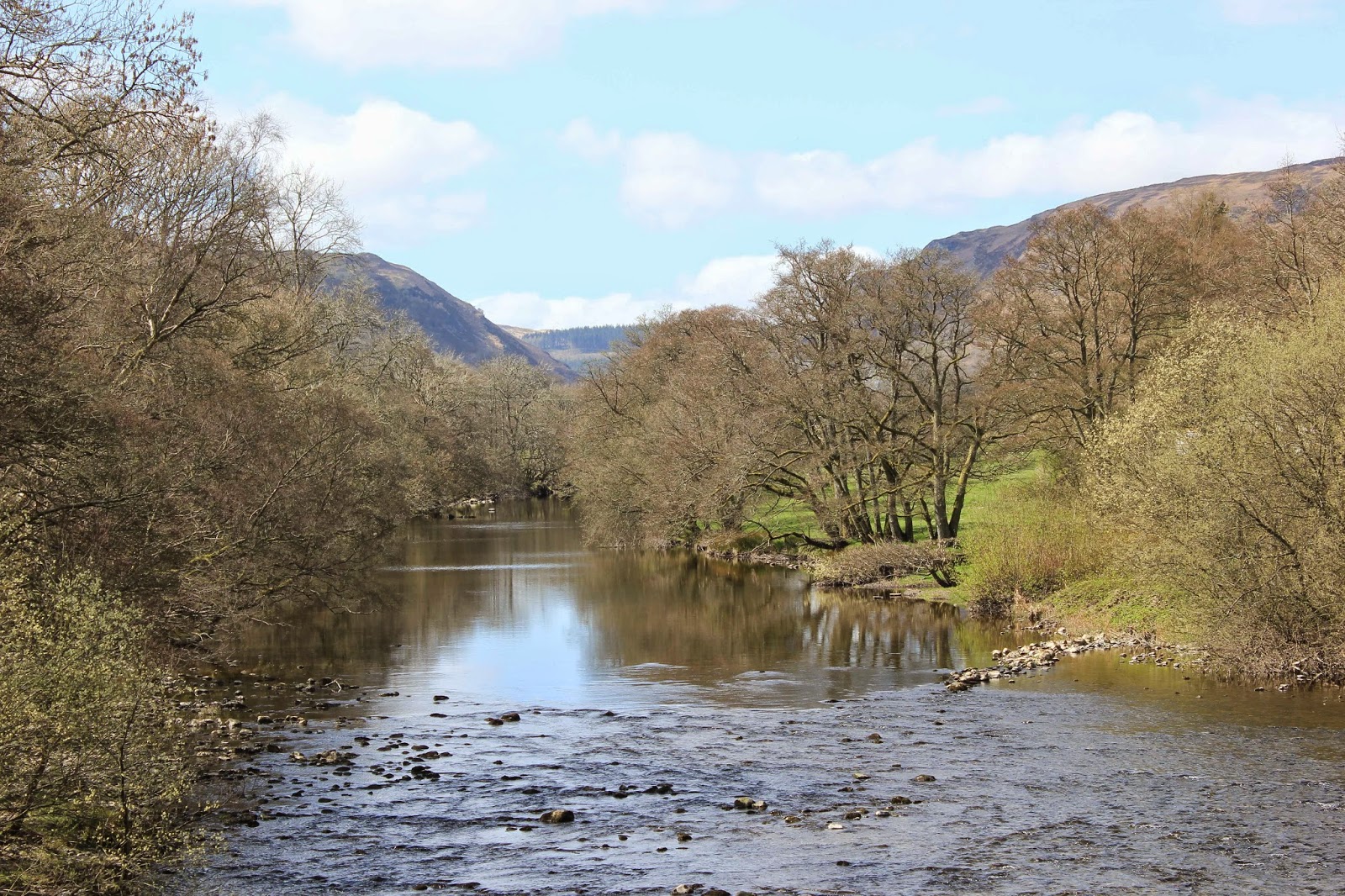 At Rhayader we joined the traffic free old railway route that took us into the always beautiful Elan Valley. It's easy to understand why so many cyclists mention this area as their favourite part of Wales. 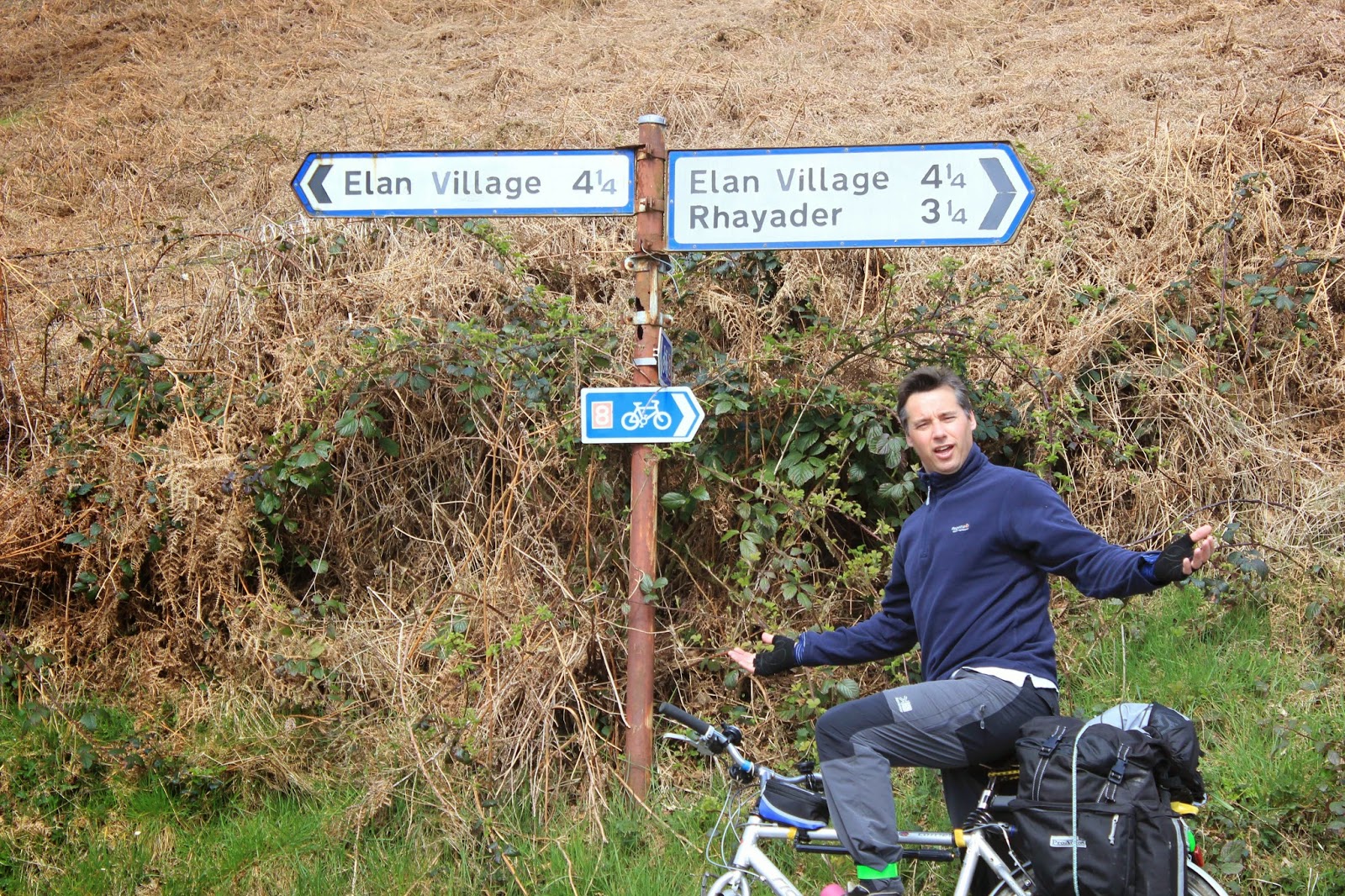 Due to the long distance of this day's riding, sadly we didn't follow the River Elan upstream to the reservoir, instead continuing along the Wye.

A Sustrans sign warned us of muddiness and treachery ahead as we reached Ty'n-y-fon Wood. It advised that we could follow the A-road instead, but the track leading up looked fine for anyone in the RSF, so we merrily continued up the rough stones enjoying the view from this elevated position where we could see the A-road below, surely it didn't have quite such resplendent views. 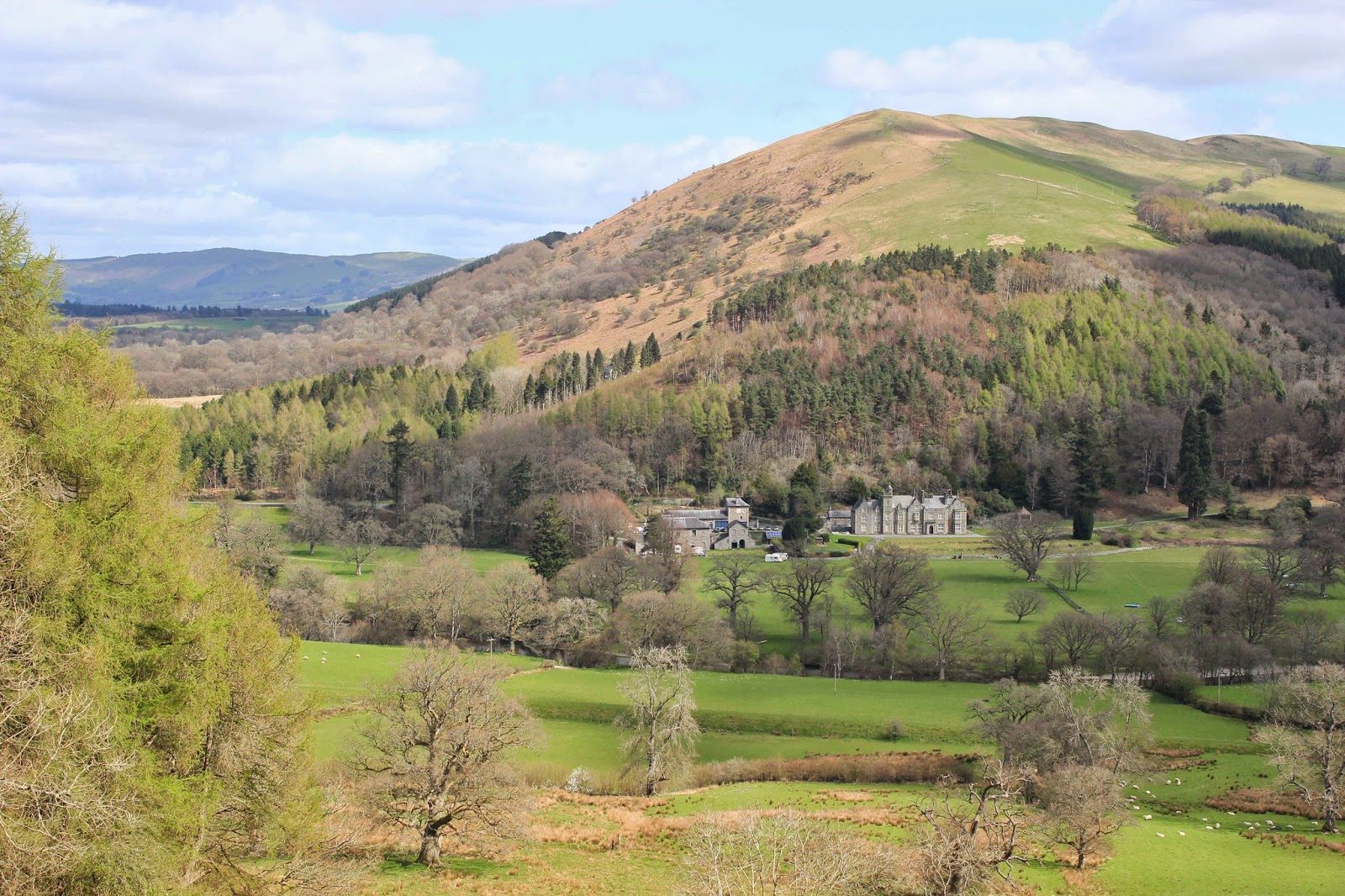 The track became more challenging as we continued. It seems that this route is being 'sanitised' and two workmen, a digger & a huge heap of stones had been laying the foundation of a more modern surface. As the work is in early stages, the small stones made for very slow progress - a bit like pedalling through treacle. Every stroke of the pedal being some real effort your pushing through the cranks. And with the heat of the mid-day sun, we were eagerly anticipating the lunch stop at Newbridge-on-wye. Back on tarmac, we flew knowing the little town wasn't far ahead. 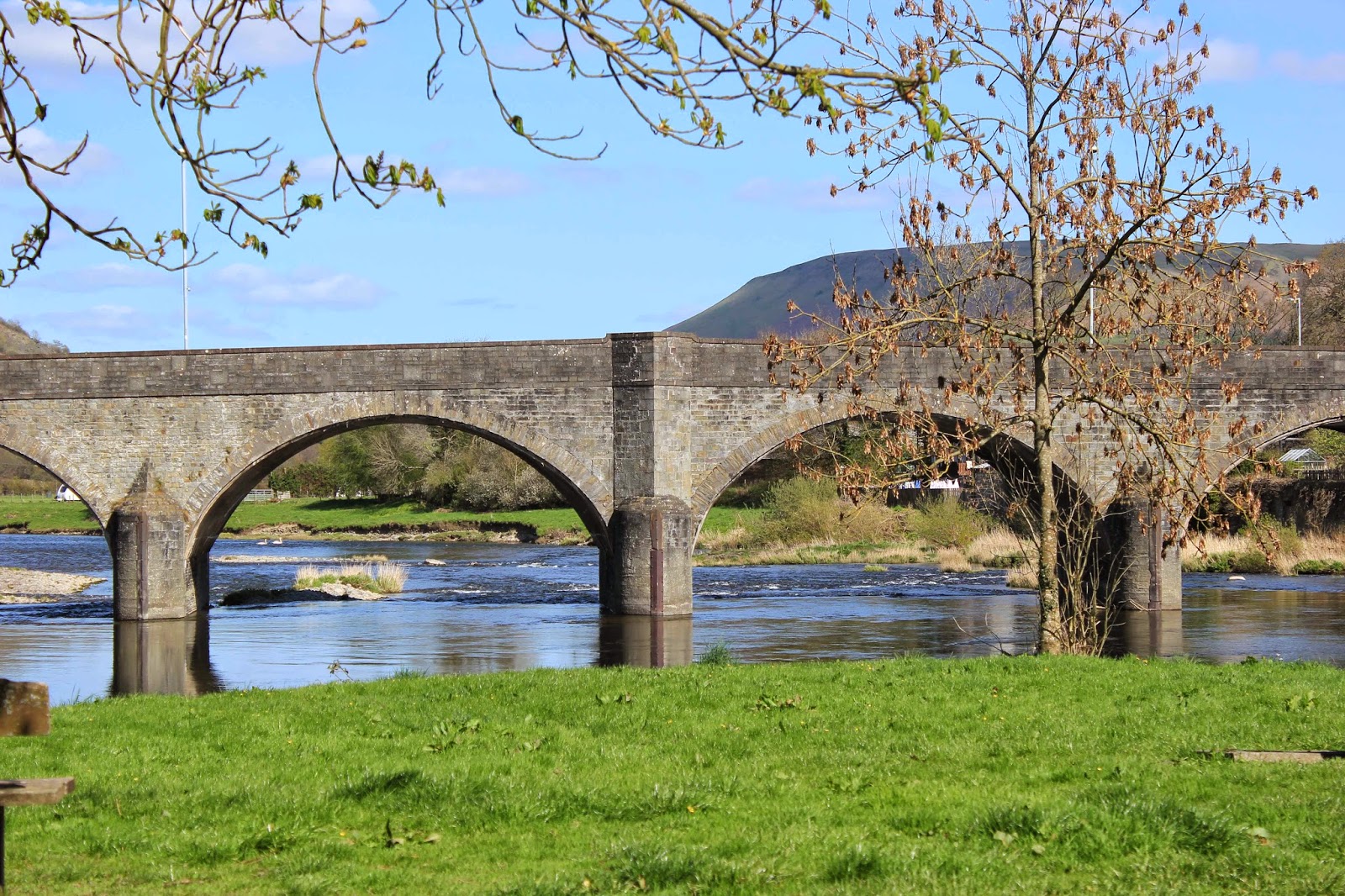 However when we arrived, there wasn't much choice and all we could find was a small snack to tie us over. It did give our legs that boost to push on to Builth Wells. It felt like forever snaking around the hills without much sign of civilisation anywhere, but then all of a sudden we were heading into a town and a view which seemed identical to a homely view of Pendle Hill & the River Ribble!
A quick circuit of the town to decide where to eat and we settled on CC's, which was perfect! Lovely salad & quiche and a cake and the couple (I think they were a couple) who ran it were so struck with out cycle tour, we got free brews out of it. A sandwich bar I highly recommend if you're ever in the town!! 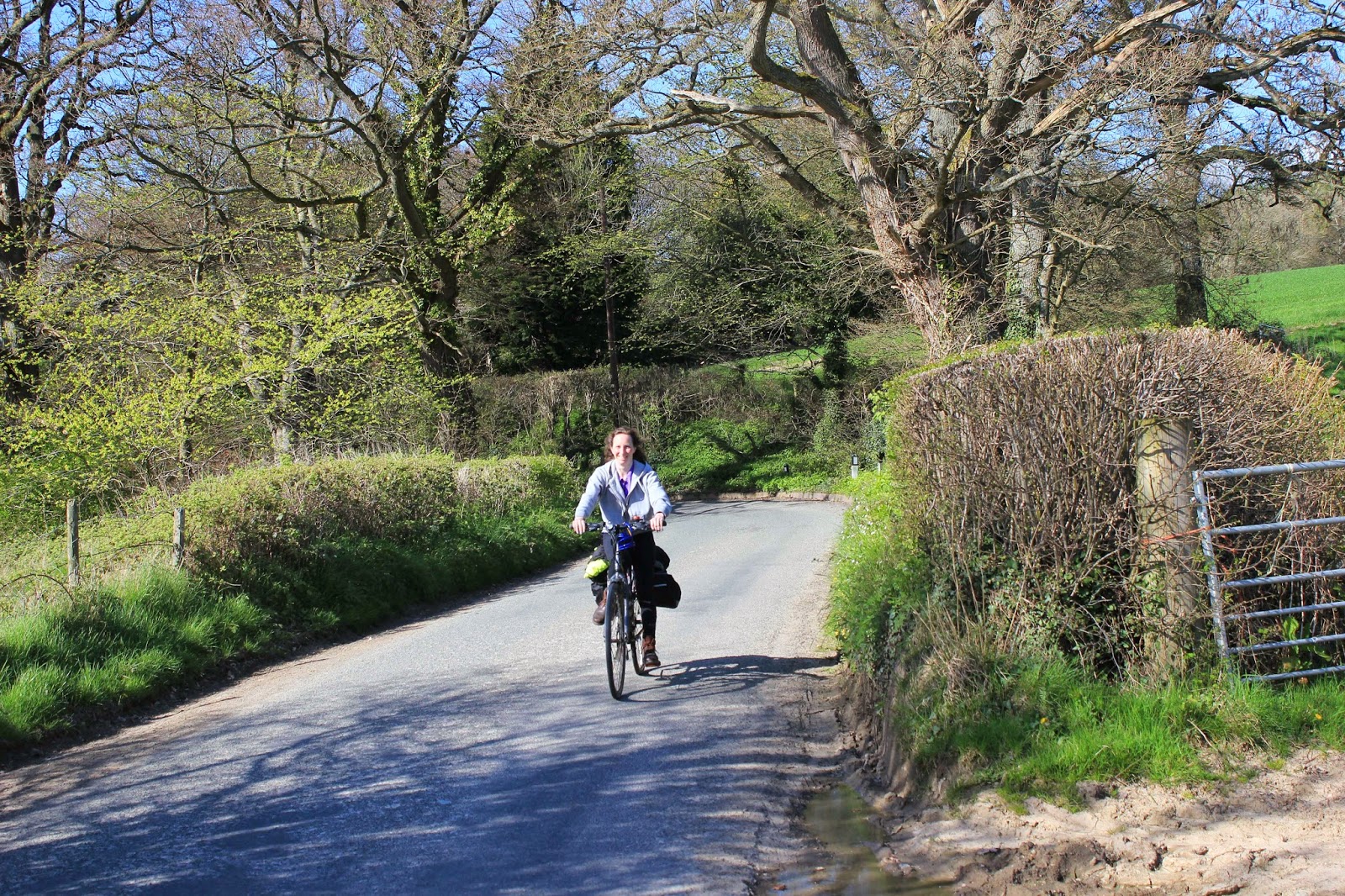 We continued the course of the Wye on the opposite side of the river from the A-road. This section was fast going - that wonderful feeling on a tour when you really feel you're actually making headway. We hit the main road, but there's a shared use footway, we carried on a bit further than the signed route for a garden centre brew & cake stop before the last pull of the day. We took a quiet lane where a very small elderly lady was sitting on her garden wall with her slippers on, smiling. We stopped to say 'hello' and she was so delightful- still full of wonder at the world and where she lived, clearly loving watching cyclists go past her house. She praised how well we'd climbed the lane, but warned us that there was much worse to come! 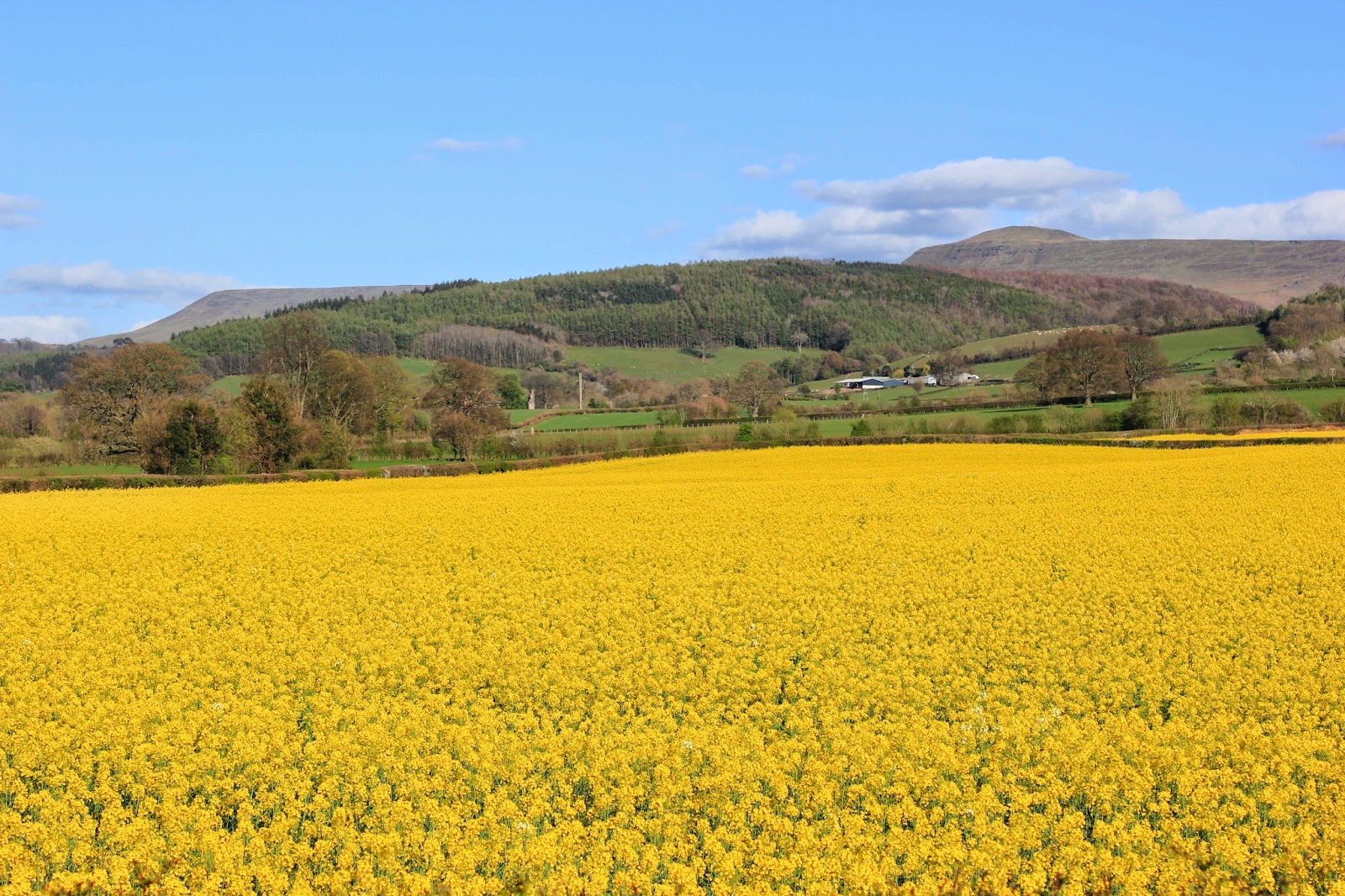 As we climbed, we saw a radio mast on a hilltop. Well that climb wasn't so bad after all. We turned a corner at Talgarth and it kept climbing, ok it was steeper, but we could make it. Two ladies in a car descending the hill gave us a big Thumbs Up as we reached a junction. A good feeling. Then we turned another corner and wow, yep, there was the hill. And it was a Good Un!! I slowly chugged up the hill that stretched out ahead. Stephen decided to be sensible and get off rather than strain his old-man-football-worn knee that had begun to bother him. I was happy to still be pedalling my fully loaded steed as a mamil passed me on his descent of he hill on some feather light make believe bike ;-) (and happily for Stephen, for that last stretch, he had decided to get back on).
It was one of the harder climbs of the tour, but probably my favourite. The lengthening shadows & warm evening breeze were lovely. 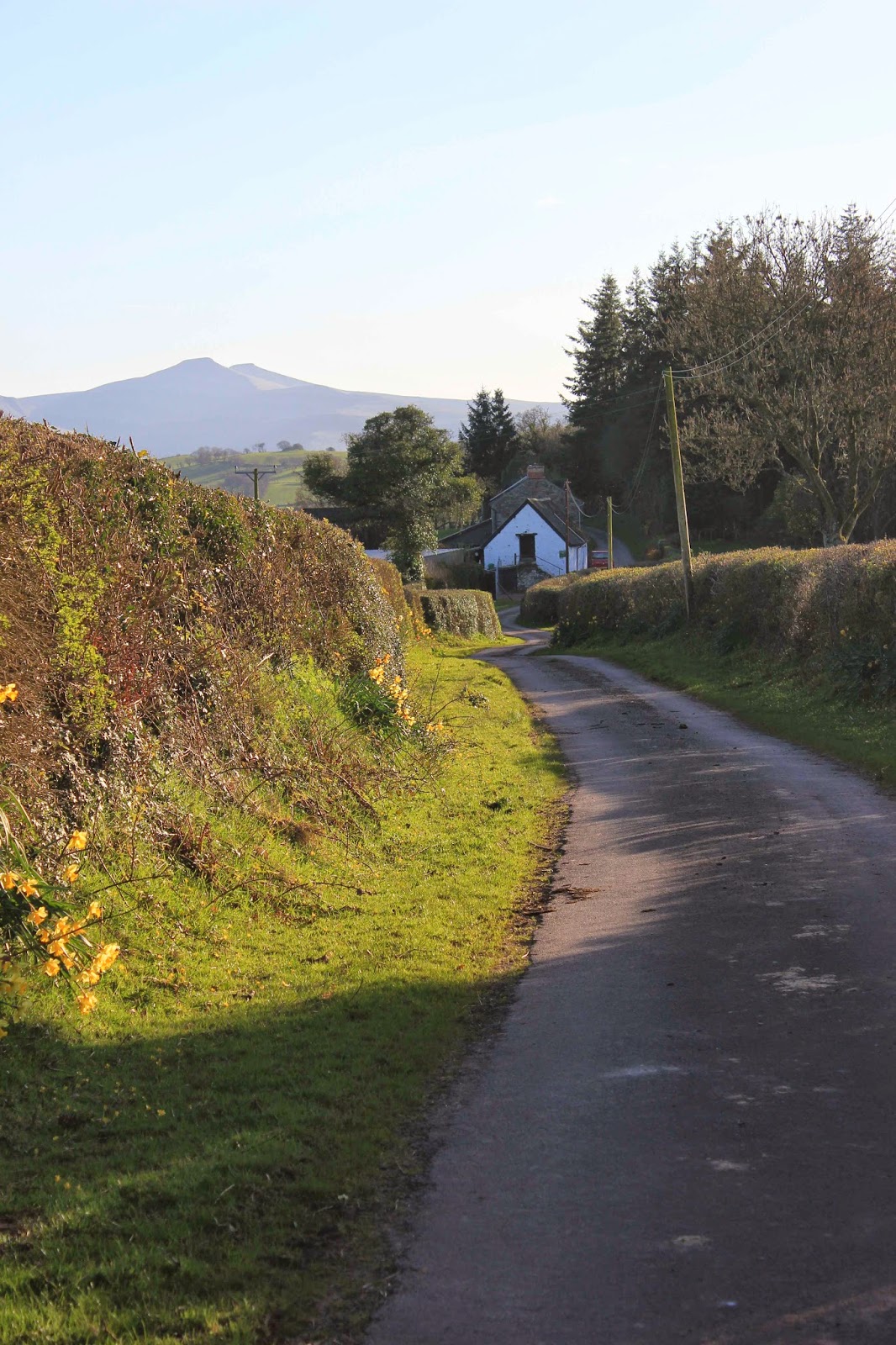 There was a good chunk of downhill from here as we approached the town of Breacon. Again it felt miles from civilisation, but then we started to pass houses and people out walking & running. But the cycle route seemed to take an excessive detour to reach the town. We popped into the supermarket for provisions for the night at the YHA. We still had a few miles left to cover as we followed the canal out of town in golden light. 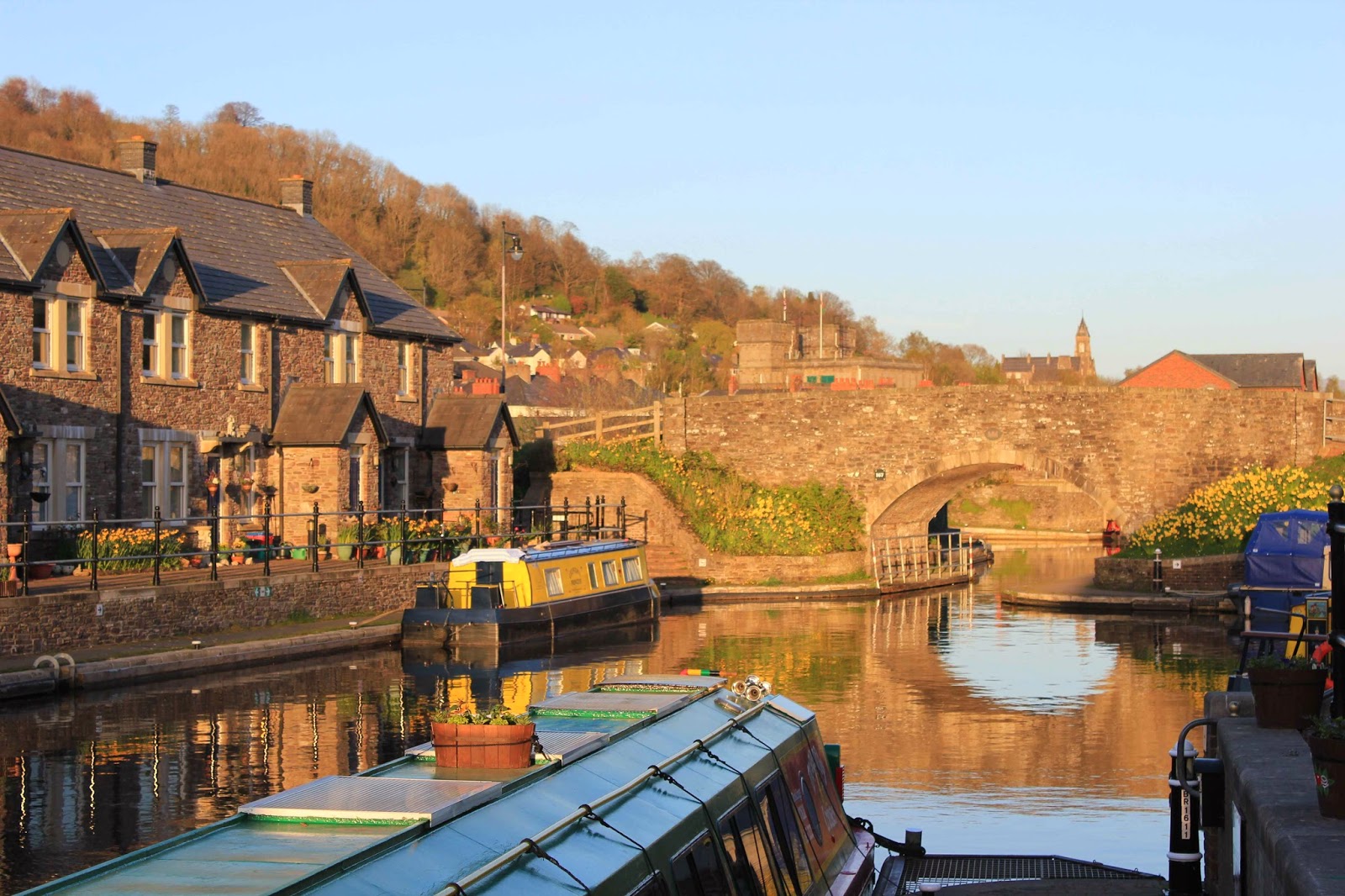 The area was charming, but we had a good hour left on the road. I was very sorry that the setting sun meant we pressed on quickly here and took the main road as much as we could rather than follow all the little roads of the Taff Trail.
The route took us right up to the hostel and we arrived in semi-darkness, with clear starry skies. The hostel duty manager was very excited to hear about our trip and she had just got married a few weeks earlier. We grabbed some supper and chatted in the lounge for a while before turning in.
We did discover that YHA Danywellant does NOT have self-catering facilities. I didn't even know there were any hostels that don't provide a kitchen for guests to use! I will remember to make a note of that for the future; it would have been very useful to have known before carting tins of beans & a box of eggs all that way. And only discovering that fact after the reception had closed so we had not ordered breakfast for the next morning...

The morning after the wedding we went down to breakfast & Nick & Sharon brought a bottle of bubbley to the table. I was feeling a little on the rough-side, so after a small glass, we put the remainder into the flask.
We knew it was going to be a big day ahead - not massive mileage, but massive amounts of climbing. We said our goodbyes to our families (thanks for taking our clothes home) & hosts and were on our way & instantly climbing. Instant climbing when you're rough is not much fun! We stopped for a few breathers as we climbed up from Dolgellau. 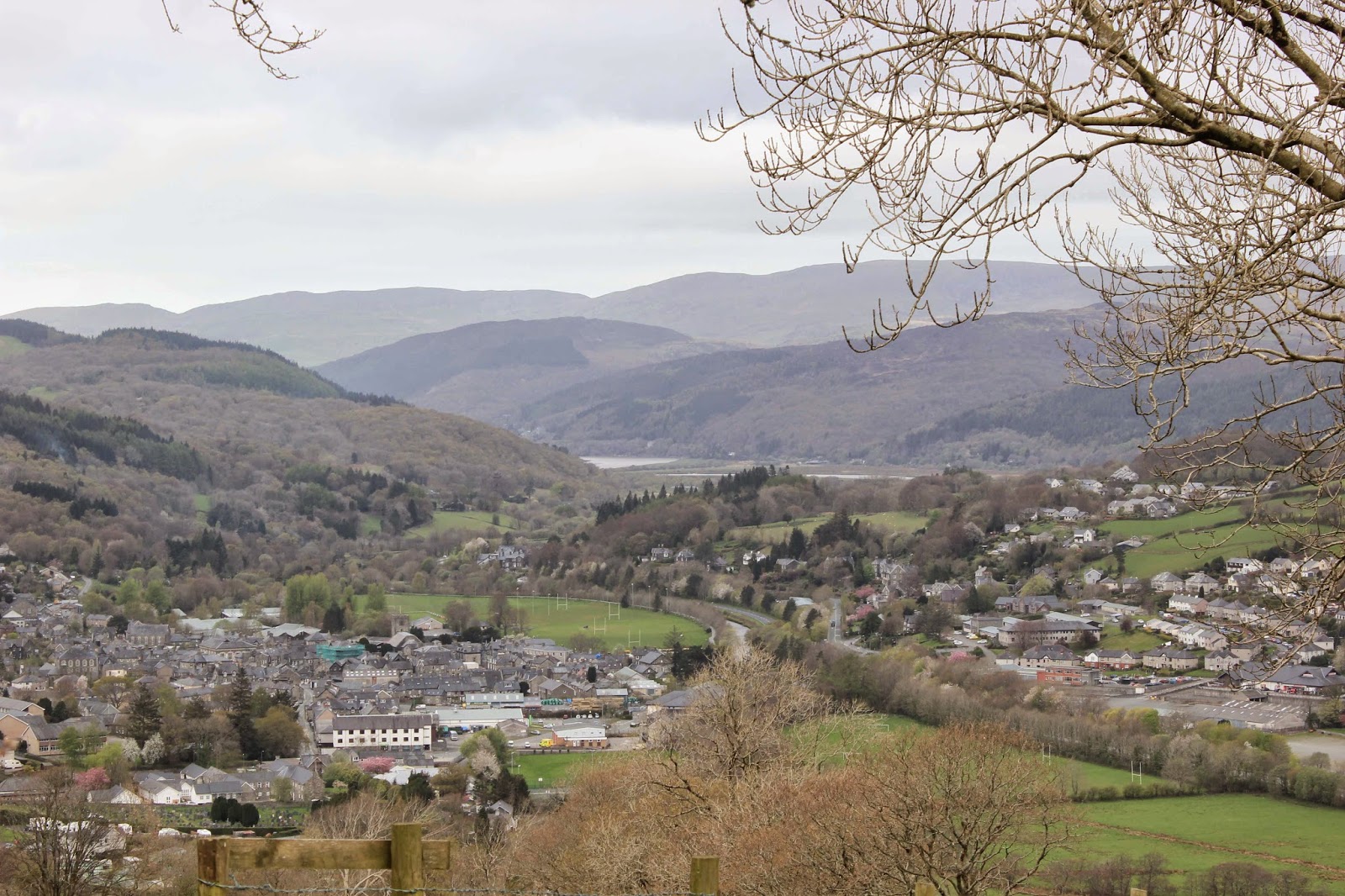 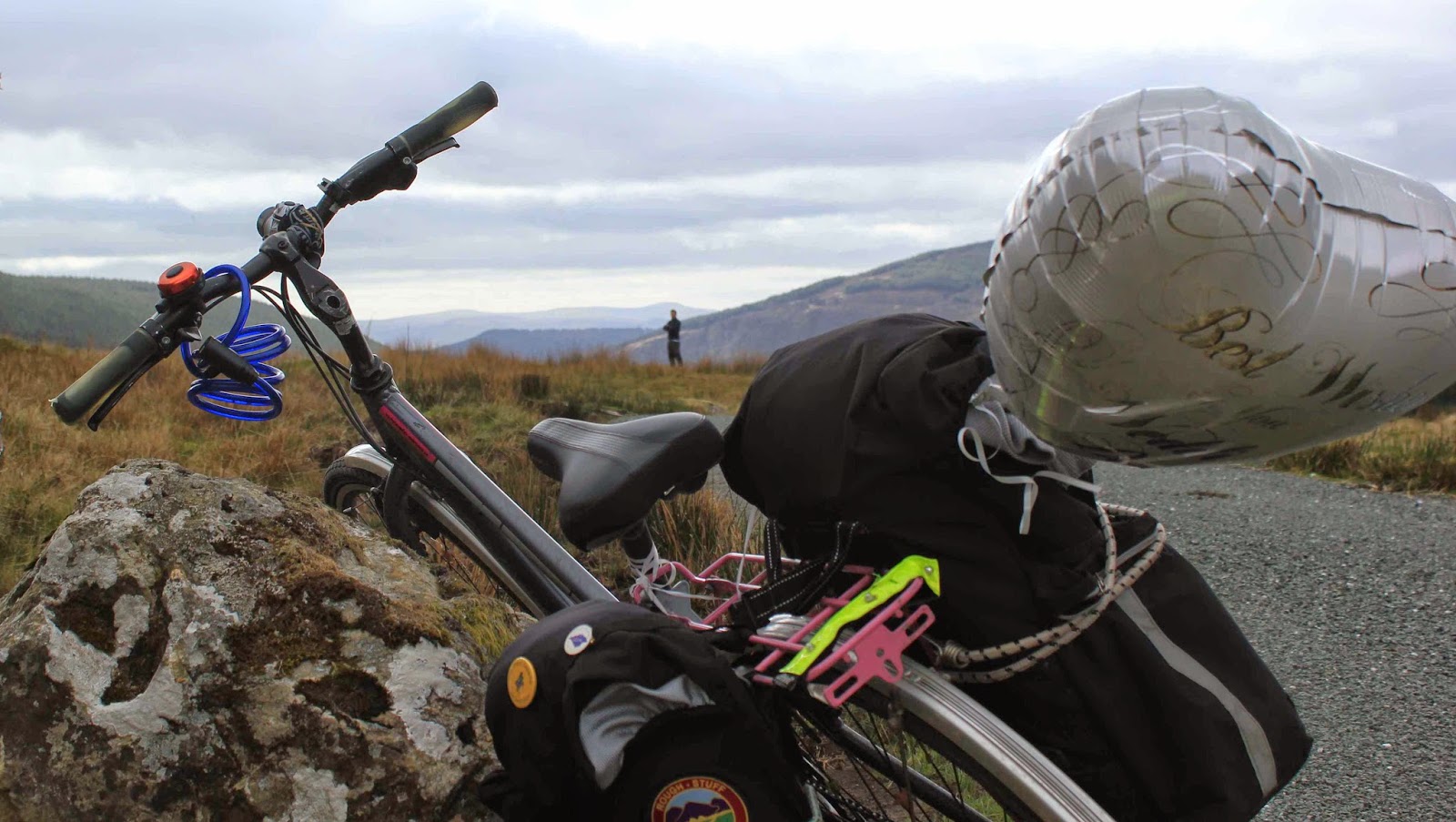 And we climbed some more. And some more. Eventually we crossed the main road as the bus carrying Sarah passed us - I waved maniacally hoping she would see us. The quiet lane carried on climbing for what felt like forever, and finally we reached the top. The view was amazing, as was the feeling that we were going to have so many more climbs to follow as valley after valley stretched out as far as we could see. 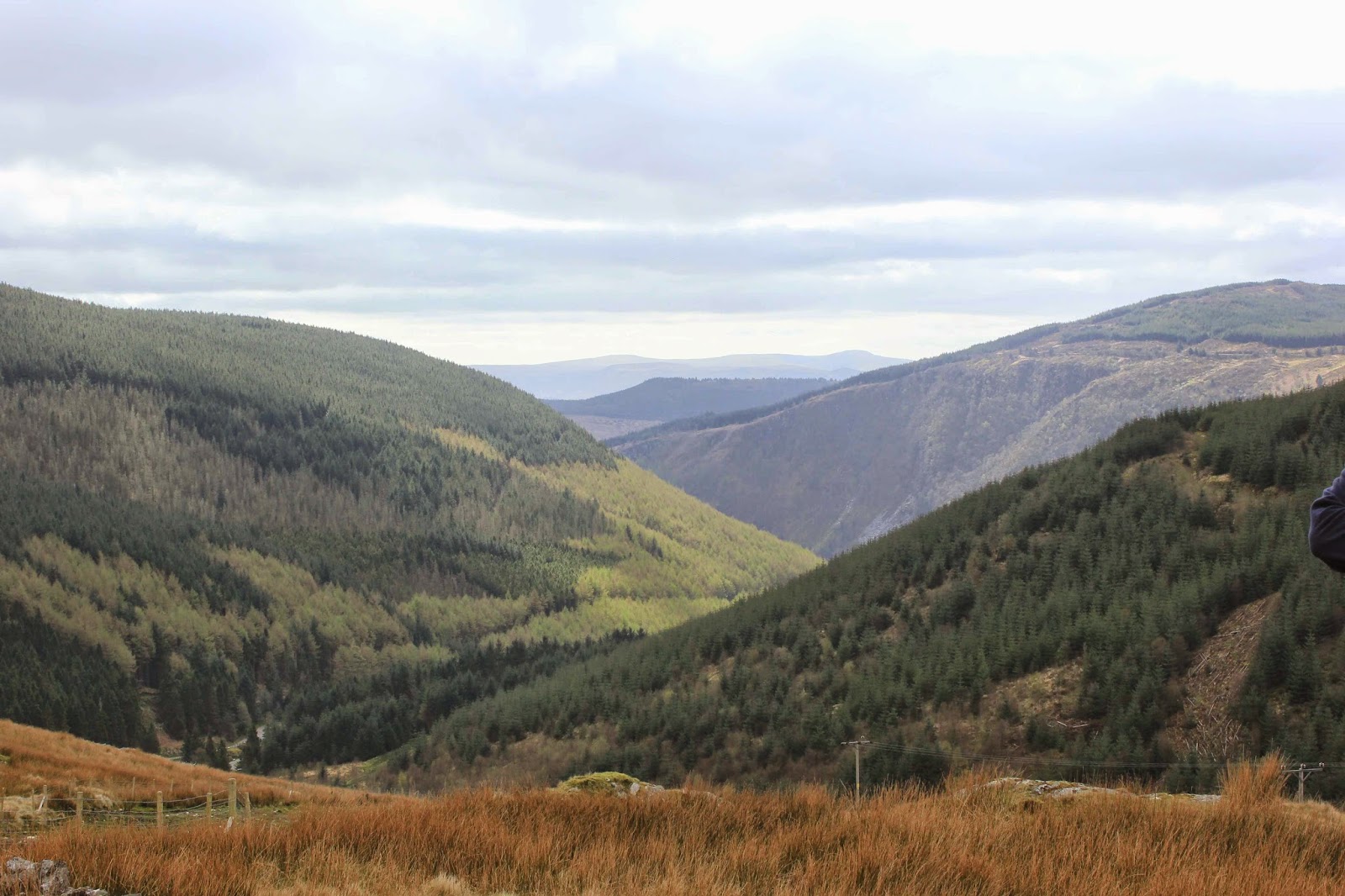 A fun descent took us past fields of lambs, verges of daffodils and villages en route to Machynlleth which was delightful after the morning slog.
We stopped at a corner shop for butties, but they'd sold out, so we grabbed some bits & sat in the sunshine on a bench eating jam slices & having a swig of bubbley (which opened with the most satisfyingly massive pop after being churned around on the bicycle frame) before carrying on to find a proper lunch at the leisure centre in Machynlleth (very cheap & good food). The lunch both gave us a much needed boost for the next section of climbing through the desolate hills where there's just nothing other than amazing views, one or two farms & sheep galore. We opted for the off road option, which was stunning, but Stephen's pannier rack was suffering from the rough terrain (he needs to invest in a proper one that is fully supported), so he walked most of the climb, we reached an unrideable section and both had to push up the last mile, which is a slog when you have a loaded bike! When we got back on the road, it still wasn't the top!
But we were rewarded by a blissfully traffic free, smooth as butter gradual descent. The last big climb of the day complete, we were enjoying taking it easy all the way to Staylittle.... 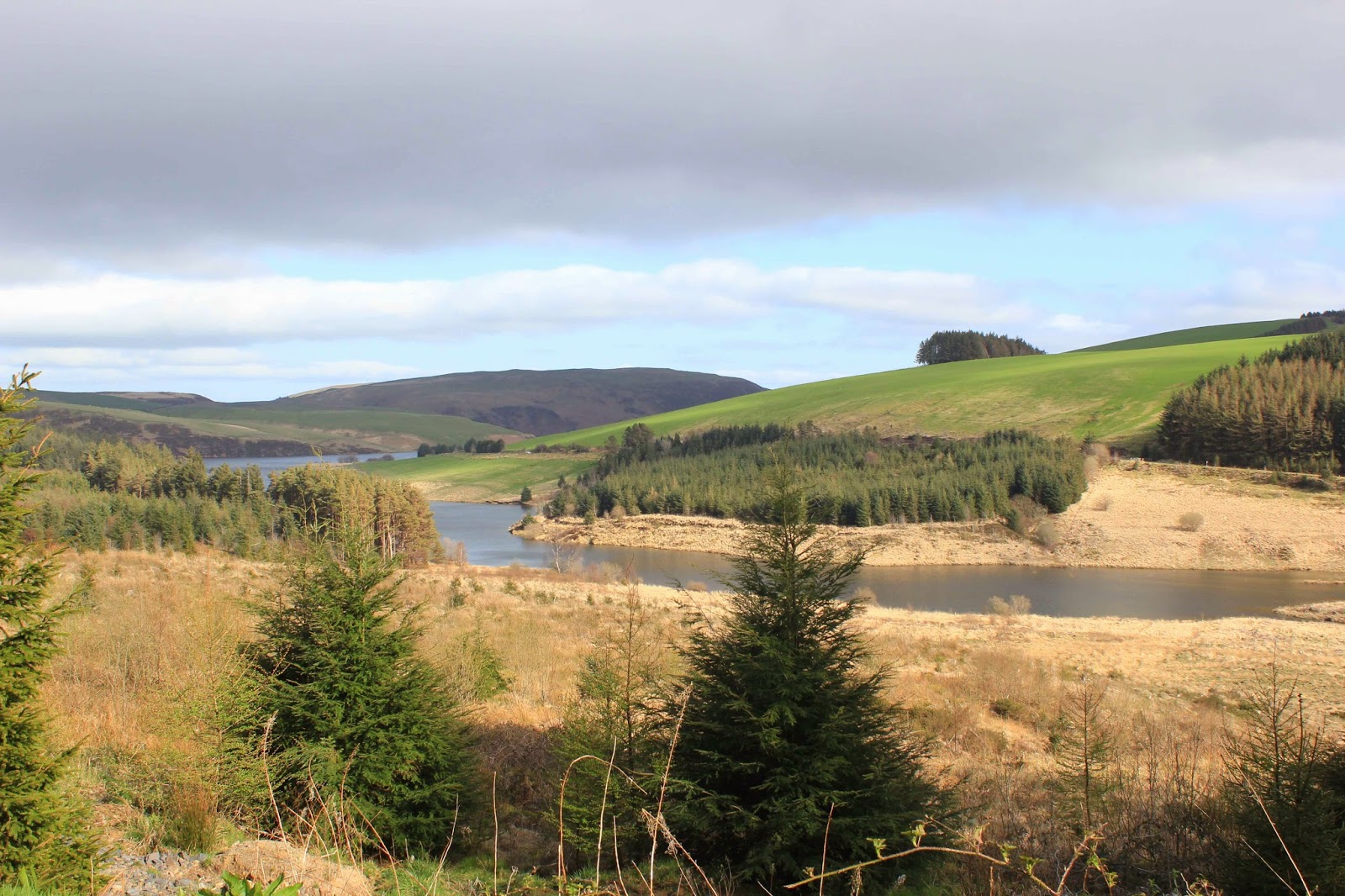 but I hadn't accounted for the subsequent smaller blips on the elevation profile and although we only had a dozen miles left to complete, the last section felt very tough. The roads rollercoasted around the smaller hills, gradually working their way up to the highest village in Wales, but repeatedly dropping you down and such a twisty road meant you didn't know what was round the next bend. Then a straight road downhill & behold, a blue building. It had to be the Bluebell Inn where we were booked in. We were both delighted to freewheel straight into the carpark rather than have the chore of arriving at a town, only to have the next task of funding the accommodation.
A basic room & an unassuming place, but after a shower, we went down to the bar & ordered our tea. And that was good! We had left beautiful, Welsh speaking North Wales behind and now in mid-Wales hearing any Welsh was also behind us.