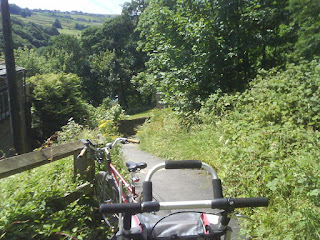 It's proved very easy to get used the trailer over the last few weeks. I'm faster at getting everything we need together & getting out of the door. And with timing when Frank looks sleepy so I can set off before he starts getting upset and he is rocked to sleep in no time. 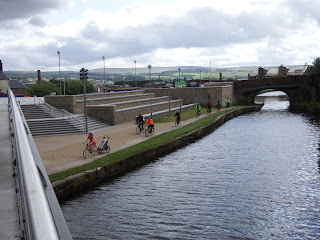 I've had a couple of rides out with the club on our family friendly routes and continued to use the bike for transport, although lugging up hills is a whole new world of riding- I did 15 miles with 1550ft of climbing the other day & my body knew about it the next day. 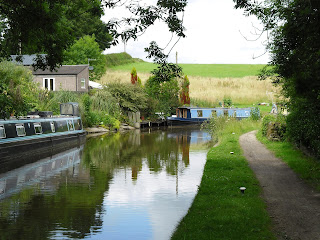 And I have had a free-pass from my husband to lead rides for the club for the last two sundays as well. Which is important for me - I find if I stay in and don't ride, I feel a bit too wary to want to ride (I really could easily turn into a hermit if I wasn't careful). When I get out & ride, I feel more confident again and just want to get on with it, getting out all the time. 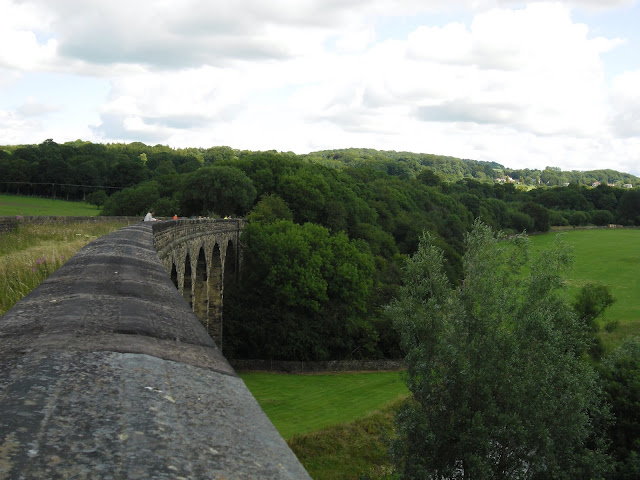 The Martholme Viaduct had its first public opening in fifteen years (when it closed because of foot & mouth). Volunteers have started clearing the trackbed in the middle to make it accessible. It's hoped that one day this stretch between Altham and Great Harwood will be a traffic free route along the disused railway that will connect to the Padiham Greenway. There's just one land owner along the route who has put a spanner in the works of this for a number of years. There's a great deal of interest in this being a route once again that would create a safe traffic free route linking the towns of Burnley, Padiham, Hapton, Simonstone, Great Harwood, Accrington & Blackburn (as it joins the canal at Gt Harwood).  It also passes close to a number of business parks and schools which would create a massive benefit to a great number of people. This bottom section has some beautiful views over the River Calder and towards the surrounding hills. Walkers have wanted this route opened up for a long time now.

I selfishly want it open as it would mean I could get to work 98% off road. Which is no mean feat when my commute is 15 miles each way. Ok this would be slightly further, but it would also eliminate some hills.


Yesterday's ride was around the Wirral Peninsular on the circular trail and Route 56. It chucked it down most of the day, but it was still very enjoyable. I'd never been to that bit of the NW before, so I enjoyed being surprised at how lovely large sections of the area are. I'll be back, in better weather.
It also meant that in three days I'd clocked up 75 miles (half with Frank in tow). Which is great when I'm missing my fresh-air commutes. Although not long now til I'm back at work.

This weekend flew by. Only about 14 bike miles in all - so not enough to really get a feel for the new (old) Kona and all were with the trailer attached so it was slow going all the way. Frank's weekend was busy & he loved it. Smiling at everyone & flirting with the lady at the garden centre too!

We didnt make the Tweed ride in Mcr as tooth number 2 was about to pop and it was possible that we could have had a very upset baby. Turned out he was fine, but it could have easily been a weekend of screams & tears. 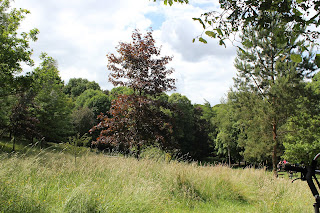 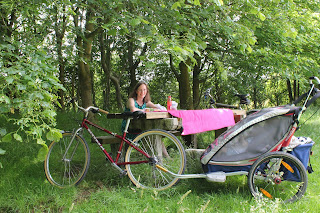 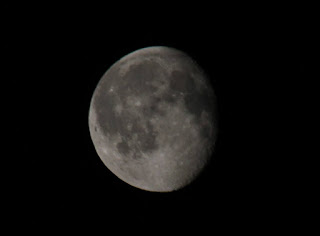 Last weekend's family ride took in the Bolton Bury converted railway (not converted all the way alas so there was some fun negotiating the trailer before Elton Reservoir), the Bolton Bury canal & various farm tracks. An easy ride but uber slow - the trailer is great except for cobbles & hefty stones and there were stretches of both where I got off to push.
I don't get over to Bolton very often, but everytime I do, I always find great places to explore.
Moses Gate Country Park was lovely, although very busy in the sunshine. 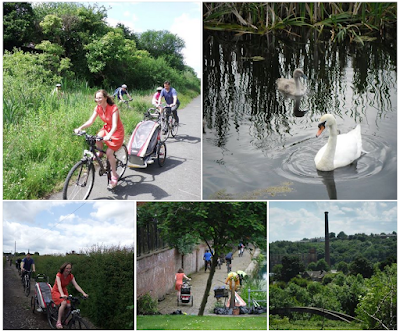 The Sunday was a 30 mile club ride over Weets & round bits of the upper Ribble  Valley. It was a cracker, alas I didn't take the camera.  We ran out of time to do all the tracks I'd planned, but that means I have an easy route for another time in the bag. 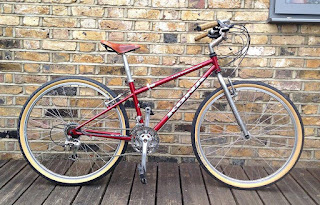 And a new (old / second/third hand) steed has joined the stable. The Raleigh is no more & after some thought about a replacement do-it-all velo, I decided not to get a hybrid.  I now have an early 90s Kona with slighly slicker tyres & upright, swept back bars. Hopefully this will be the ticket when Frank's ready for the Yepp mini. And it fills that hole I had for a classy looking retro mtb.
Sadly it didnt come with the Brooks- I need to get a suitable replacement as the charge spoon looks out of place.