December is always such a sociable month. Meets with friends, colleagues & cycling groups. Usually by the time January comes about, I'm ready for a rest.
This December is no exception - in fact as life goes on, I end up with more & more December events.  The fact that I no longer get school holidays is just bobbins - I could have all of December off work & fill it up.

This week has been a brilliant cycling week inspite of the bitter cold weather we've had. And I now realise just how un-aerodynamic reindeer are!

My cousin was home from Wales last weekend, so I convinced her to come for a leisurely saturday ride to Hebden Bridge. She has an old heavy 90s mountain bike with low gear ratios which made the road ride over the Pennines challenging.


The views were spectacular after the snow earlier in the week - the hills salt & peppered with left over white stuff.  It was beautiful and after that initial warming climb, you can really enjoy the views before you start the cold descent to the valley bottom.

The sky was dramatic! Stunning. And it was delightful having some solo girly company on the ride. We lunched & then caught the train back as Roz had no lights on her bike.

I took Tuesday & Thursday off work to enjoy some Rough Stuff trips.
After a ride at 8am in minus 5 degrees to the meet point, my hands felt like a sledgehammer had trashed them.

I contemplated going home - but after I'd warmed up and got chatting with the guys, I donned an extra pair under my ski gloves and we headed along  the frozen canal towards Yorkshire. Ducks and swans skated about and it was picture perfect. The muddy fields were frozen solid in most places which made for a very bumpy and unforgiving ride between the canal and the disused railway. 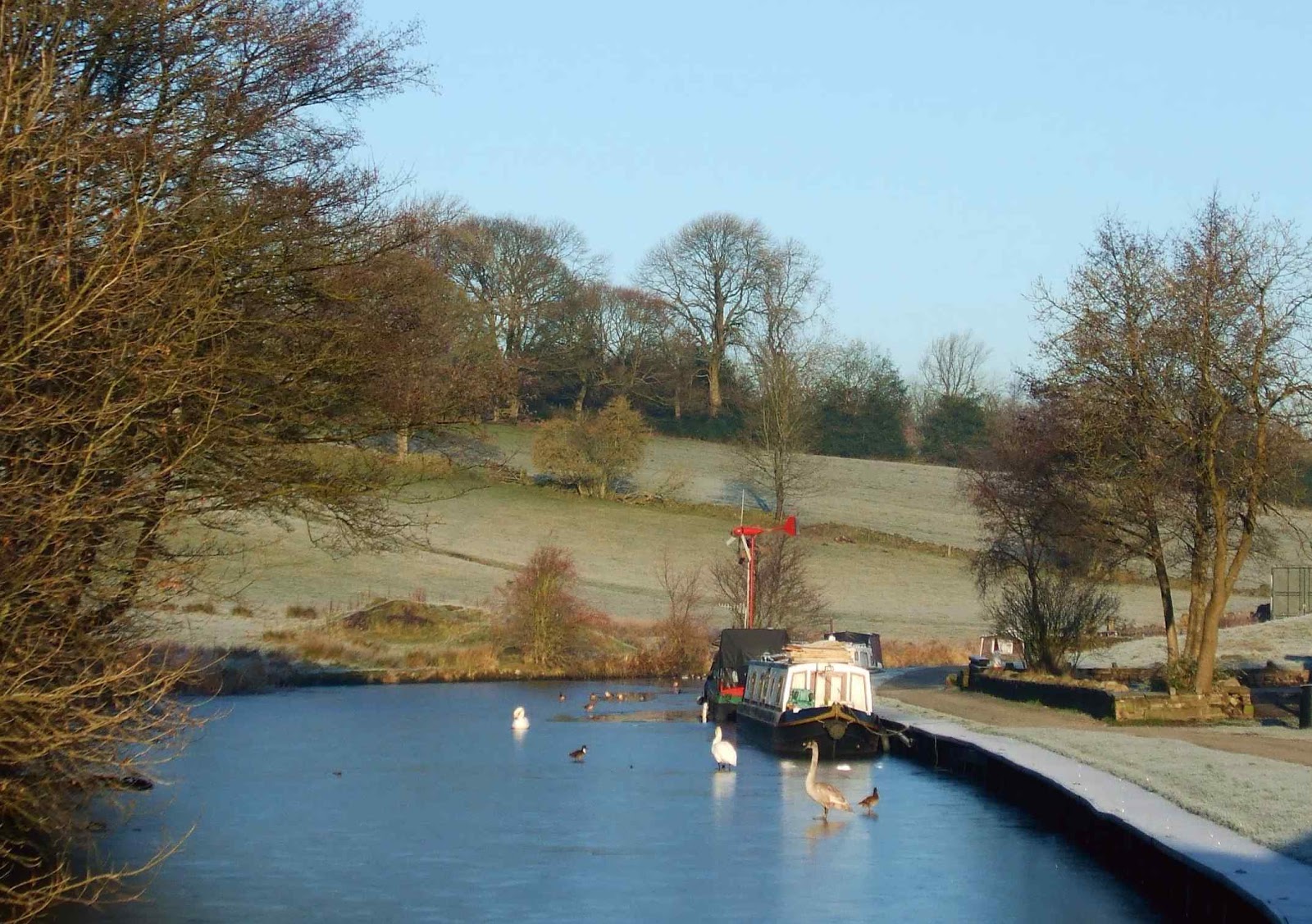 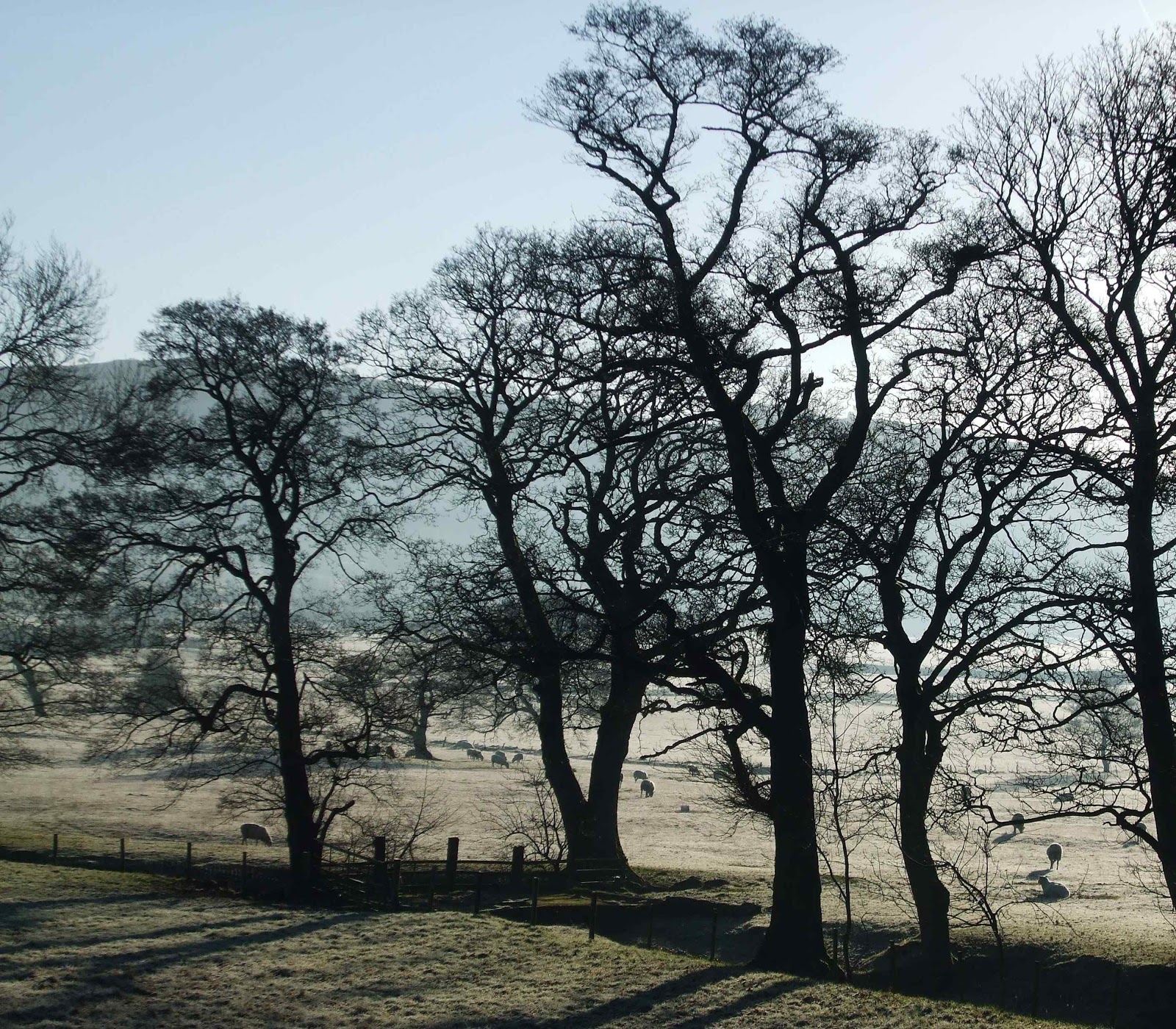 The last few miles were on the busy A59 before enjoying the road into Carleton, which happily was closed to motor traffic whilst diggers had made an impassable hole. It meant we could cycle 3/4 abreast, chat, not worry about cars and look out at the beautiful hills in this pretty spot.
We joined with the Yorkshire Rough Stuff faction for their festive lunch. I met some new faces & caught up with riders I'd not seen in many months. The lunch passed far too fast before we had to set off back.
Because it was just so cold, I took very few photos, but two pairs of gloves did just about save me from agony.


Thursdays forecast predicted slightly warmer weather, so after surviving the ride on Tues, I set off with a big smile for a ride in the Ribble Valley.  Clitheroe was bathed in winter morning sunshine as we set off. Over the River Ribble and into Waddington for our first brew stop. It is chocolate box picturesque here.

We started to climb up and by the time we reached Bradford Fell there was nothing, but thick freezing fog. It was like being on an alien landscape - the muddy ground was solid and interspersed with frozen, glacier-like puddles, which made any actual cycling nigh on impossible.


At least walking was warmer than riding. It was bitter up on those tops - much colder than I'd expected. I felt like I was on an Arctic expedition.

We pushed our bikes for miles, I thought the lunchstop would never arrive. It eventually did at about 2o'clock. Hot soup, hot tea. It thawed my hands, but not my feet.

We cycled the last few miles on the road back into Clitheroe riding into a beautiful misty sunset... but trying to beat the sunset, we didnt stop to take any photos.


Thursday night was a really good bike maintenance course through work. Really useful - I now know I can change a back wheel puncture no problemo. Easy tips on changing your brakes and other useful tips from the people at Go Velo.  If you get the chance to go on the course, I recommend it. They also do cycling classes for all levels too.


Saturday was a day off the bike, but in one of our lovely Cycling Cities, Lancaster. I've only ever really peddled through Lancaster before so exploring the centre and the castle was really interesting. Next time I'm in the area on my bike, I'll take an extra hour or two to pop into the centre again. Very picturesque and with some interesting shops; my favourite being a tea & coffee merchants that felt like stepping back into Victorian times.

Sunday was the highlight of the week. We took the tandem over to Liverpool to ride to Alder Hey Children's Hospital to deliver Christmas presents to the children who are in over the holidays. A couple of hundred cyclists in santa outfits, with the odd other costume cycled through the city to car toots and waves and cheers. It was lovely and for the first time this year I got that festive feeling. 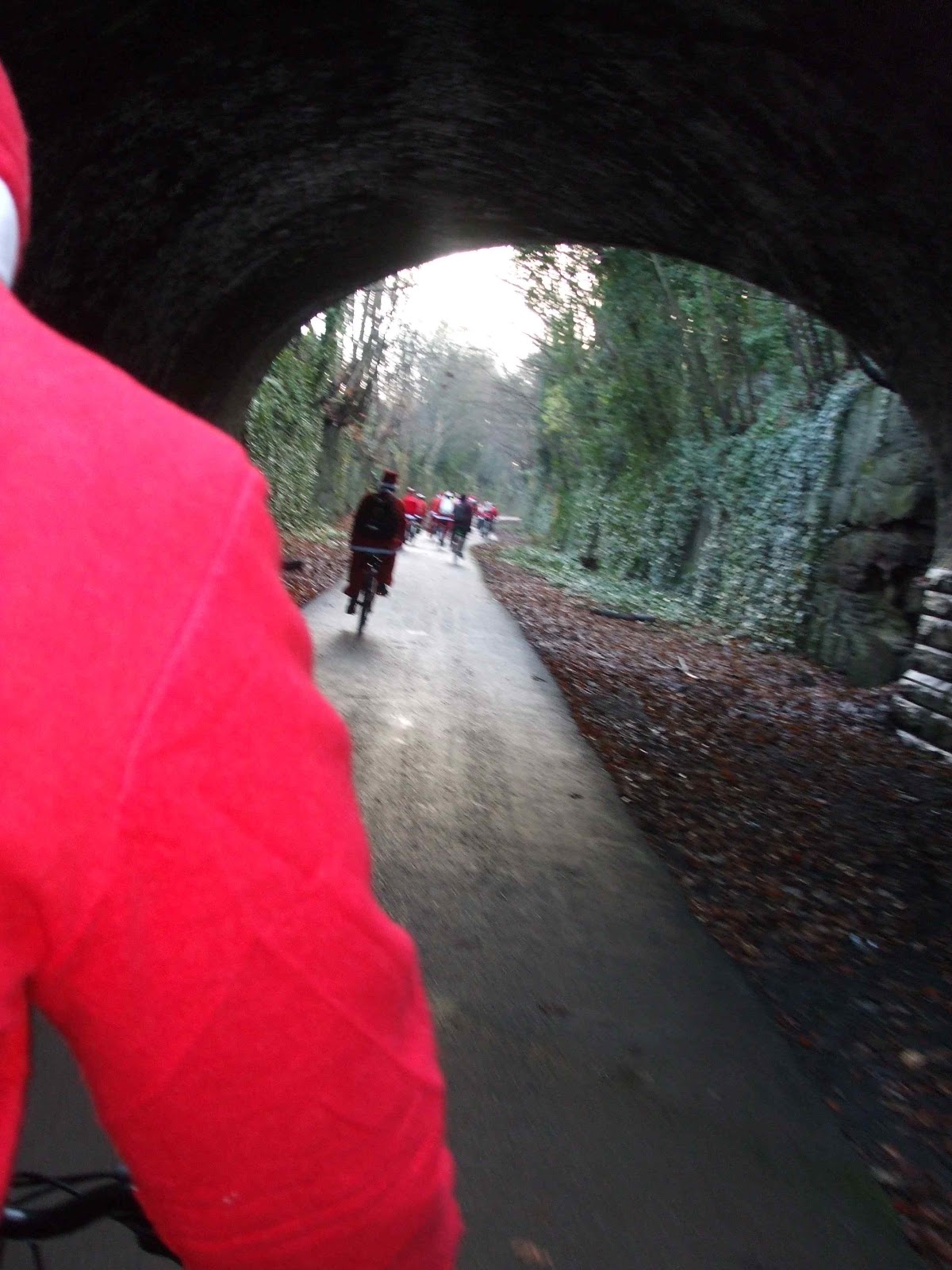 There was a sergeant major keeping us all in check in his parade boots. I didn't know a human being could shout so loudly!!
There were four tandems in all and we chatted to a lovely couple who regaled us with their tandeming exploits over the years.

After warming up at the hospital with brews and choccies, we all made our own way back. Even though there was just Stephen (santa) & myself (a red nosed reindeer) cycling, we still got lots of waves and children looking in awe. It was lovely. 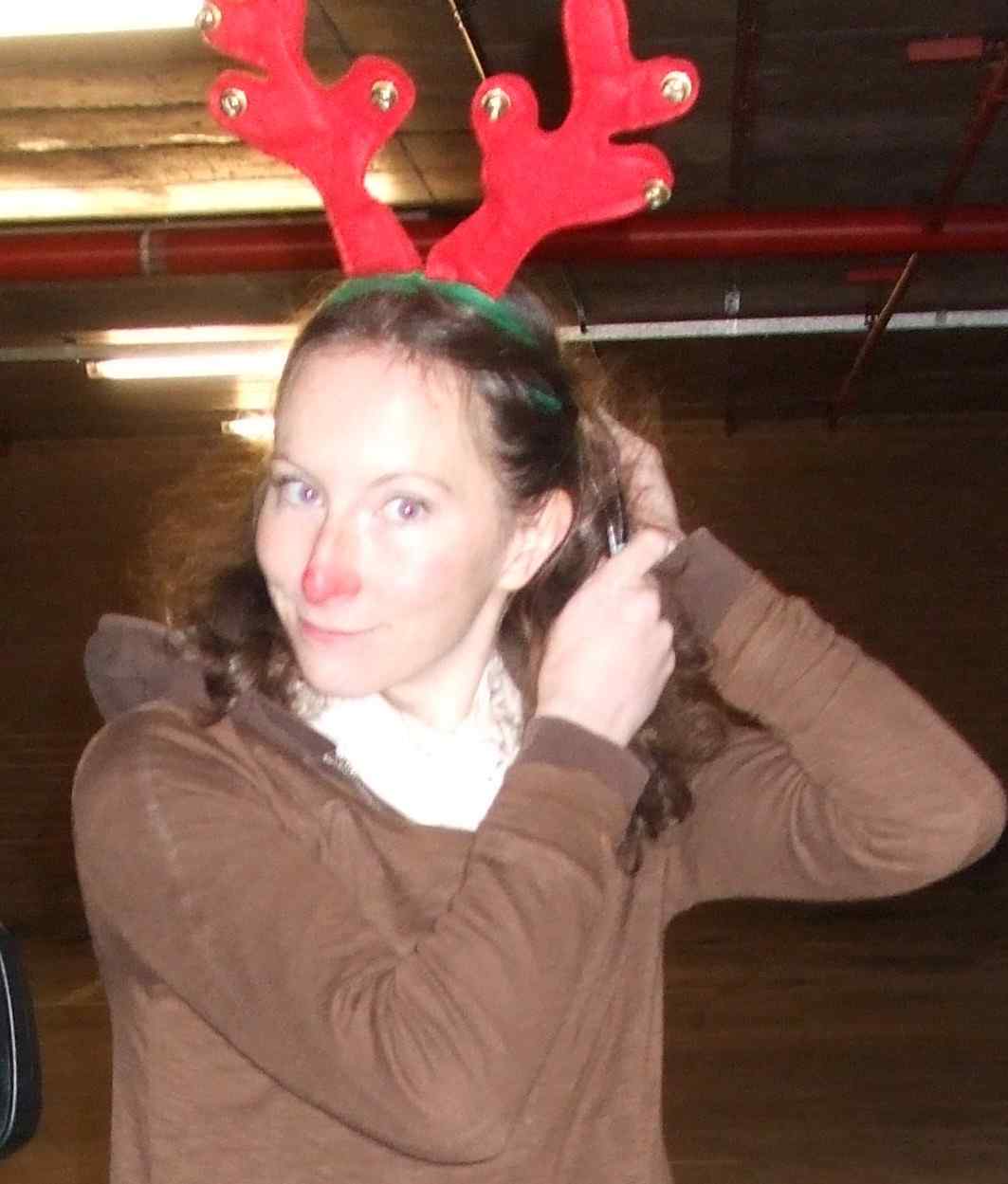 My antlers were far from aerodynamic - any slight gust of wind pushed against them. Thankfully my skills at plaiting my hair around them kept them in place.
We pushed the bike back through the centre to have a quick look. It's 13 years since I last visited Liverpool & a lot has changed since then. Looking forward to the new year for a proper trip back there to explore the fine historical city, admire the old & new architecture and hopefully utilise the cycling Liverpool map that Dug donated to us.

What a fantastic cycling week it's been!
Posted by Unknown at 11:10