Tandeming the Isle of Wight - pretty similar to the Pennines ie hilly!!

The 28th annual Isle of Wight Randonnee, around 100k touring the isle. This year there were around 1700 cyclists (it was rainy and cold) and 4500ft of ascent. And we were doing it on a tandem!

Our total time on a tandem was the two miles the night before, when we collected the bike from the hire shop.  I'd fully expected to wobble off it straight away, but we set off with no probs. Took a little getting used to that if S stopped peddling, I stopped - I had to ask that he let me know when he was stopping and more importantly - restarting peddling.

Sunday morn and a hearty breakfast etten, S & I got well & truly waterproofed up & we set off two miles to the check-in point for our cards that would be stamped at the check points round the isle. 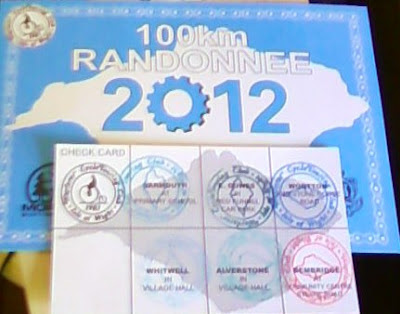 The first 20 miles to check point 1 flew by - mainly on the flat & you can really get speed up on a tandem - we passed road cyclists. I held on tight and tried not to show fear on the downhills and especially on the downhill turns!!
Leaving someone else in charge of the bike you're on is a little scary, but it wasnt long before I had full confidence that S wasn't going to have us crashing over and relaxed into it.

After the first check point things got much much hillier to say the least! It was like Lancashire a bit here - hilly and wet, countryside very familiar feeling. Very beautiful. Alas didnt take many pics on the ride simply because of the rain.

After each check point, brew and bite - it got much colder - waterproofs kept rain from soaking in, but we were both just as wet under them - the sweat stayed in & after stopping and restarting into the wind, we were freezing for a mile or two til we heated up again.


All our fellow cyclists were lovely - really cheering us on being on the tandem and congratulating us at getting up the hills - we did not push up any at all! We must have been keeping good pace because at the check points we kept meeting the same people.


The last third was lovely after a very long climb of a mile or four up to pretty much the highest point on the island - the scenery very different from here - more gentle hills here and quaint tiny villages.... Til the last 7ish miles when there were two enormous hills that we were both very proud to conquer.

One cyclist asked at the end if we'd be investing in a tandem.  I would love to, if only I had somewhere to store one! I'd love to aim for the Manchester 100 after summer on another hired one. Yes they're hard on the uphills, but for the extra conversation and smiles you get, I certainly think it's worth it.
Posted by Unknown at 08:51