A blustery Tuesday morning, fourteen riders set off from the remote bunkhouse at Tranearth to traverse the shoulder of a mountain as Brian led his 'Three Colls' ride starting with the the tough ascent to Walna Scar Road. 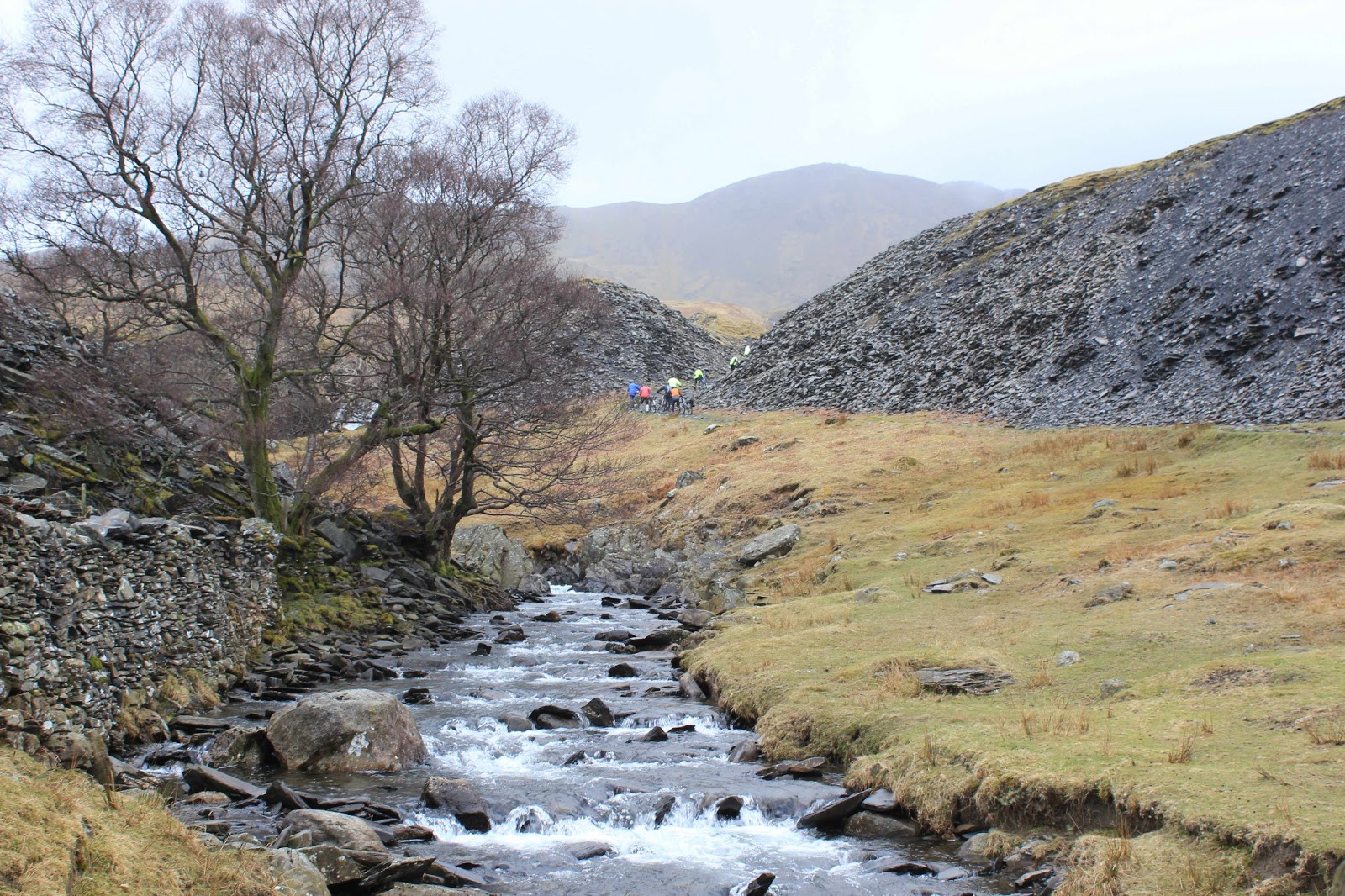 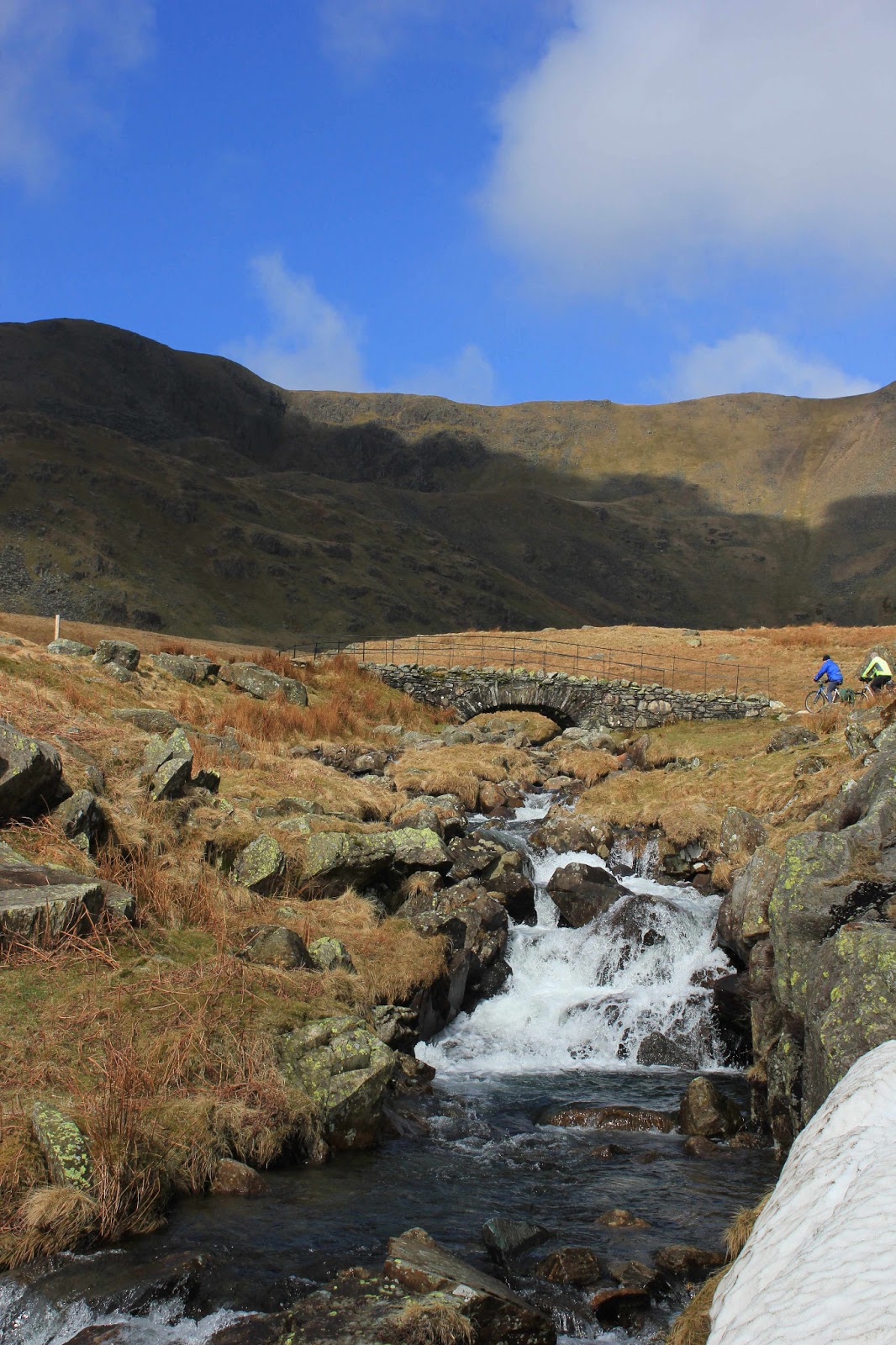 A handful of walkers passed us by, probably wondering what sort of people push their bikes over this rocky pass into the Duddon Valley (it felt like a journey to Mordor). Many of us wondered the same as the wind stopped us in our tracks repeatedly as we slowly made our way the few short miles to the summit. 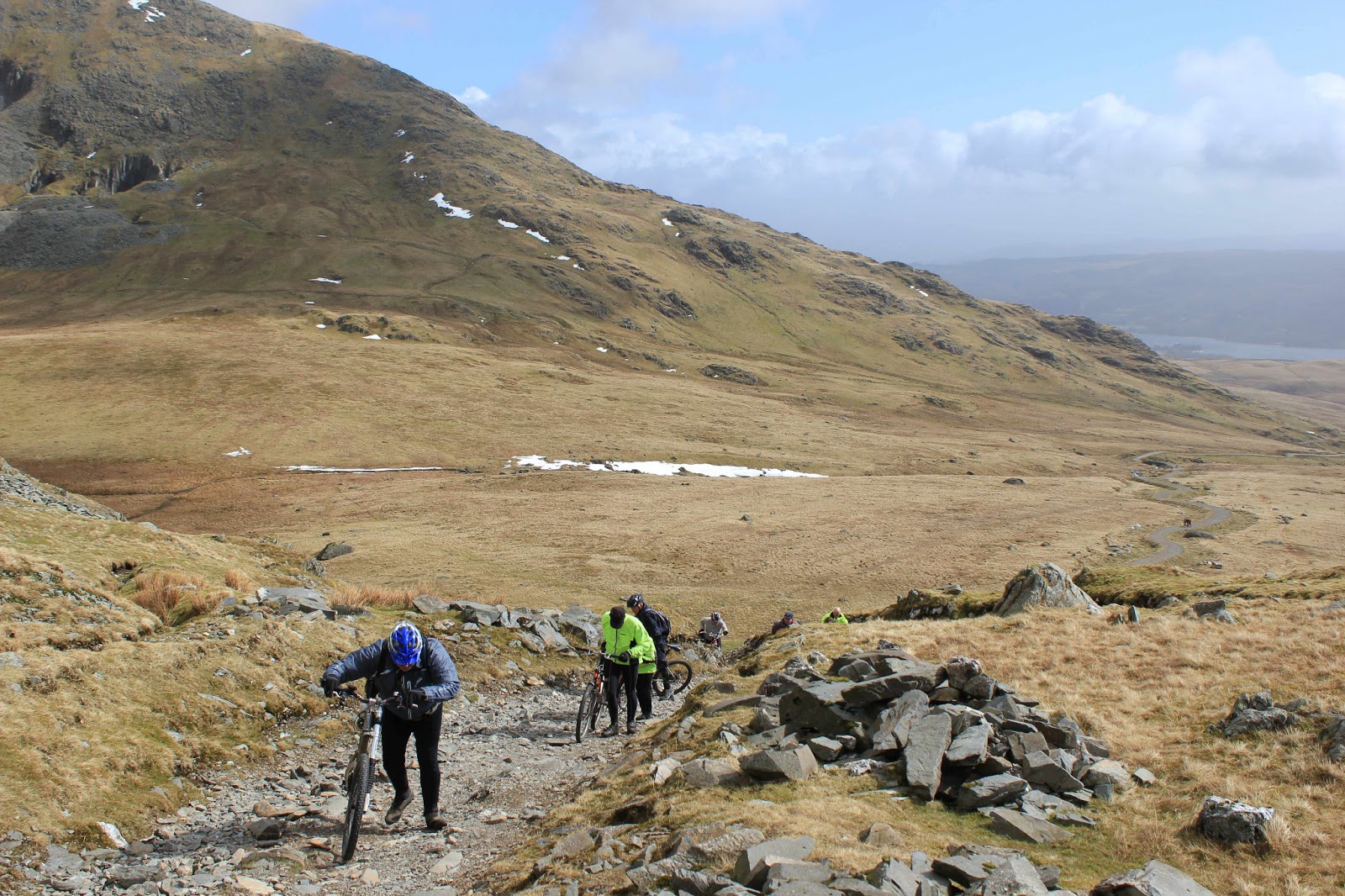 The descent was slightly easier, although the wind so fierce that peddling hard was required - gravity was not sufficient! I could hardly see anything as my eyes streamed with the biting wind, tho I managed to see the remnants of snow and avoided blowing off the edge of the track.  A fun technical and rocky track all the way to the lunch stop at Seathwaite. We had only come three miles and it had taken all morning. 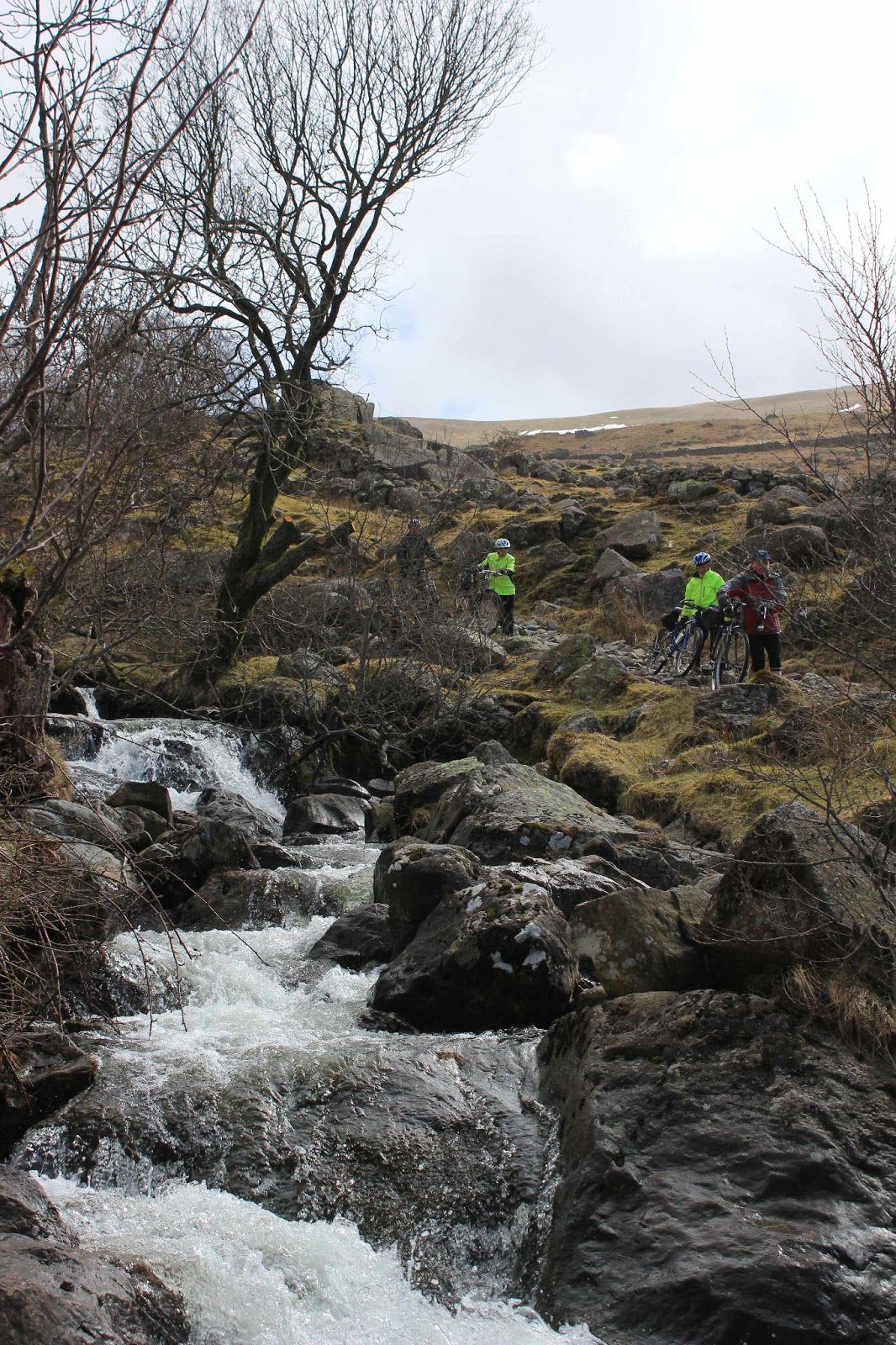 Brian seemed a-feared for the evening, wondering how Judith might take her revenge with the available cutlery at base. 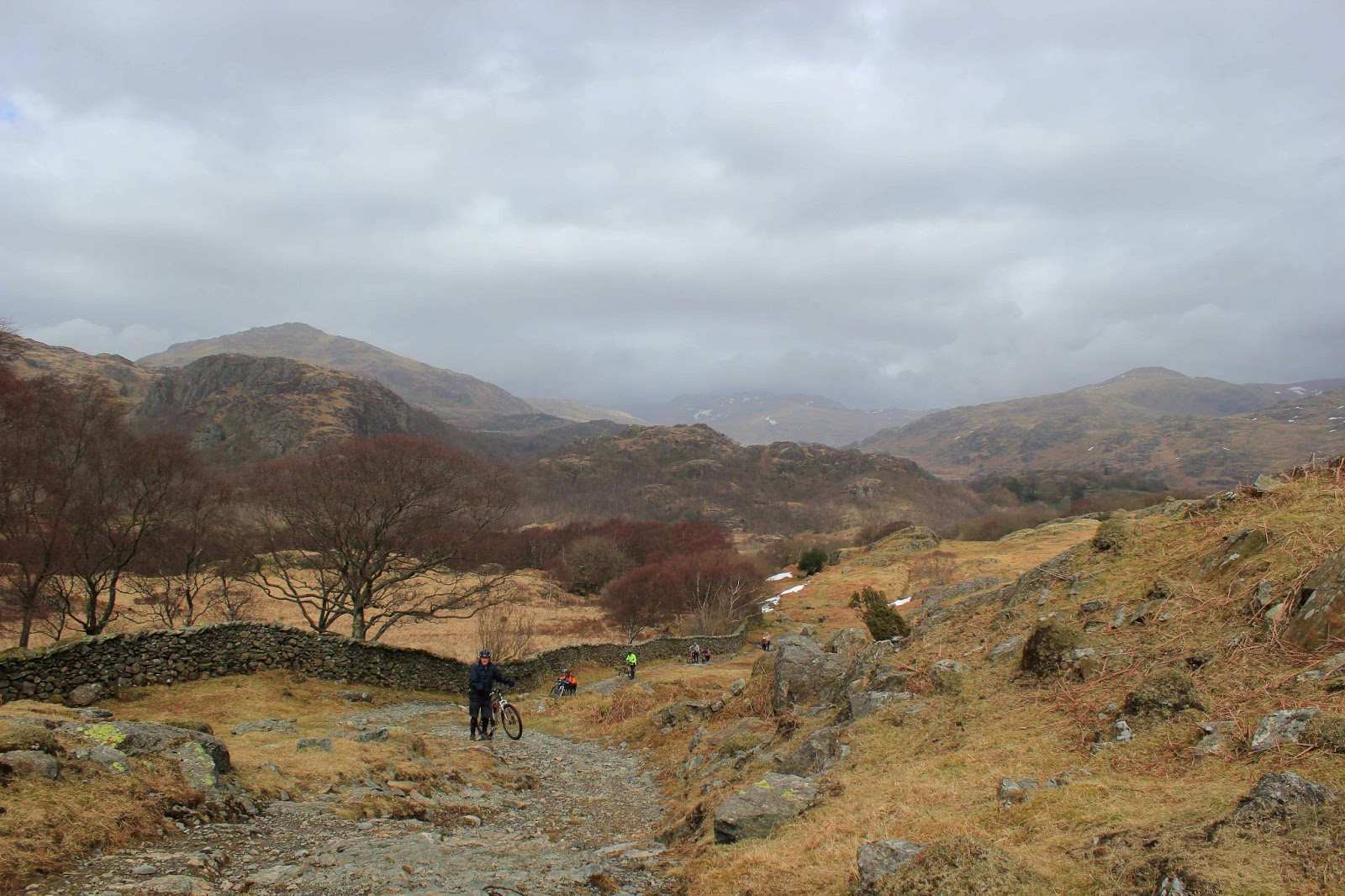 The second of the three colls was over Broughton Moor. A much easier ascent that was thankfully mostly rideable and had some easy smooth lanes on the other side.  We climbed a beautiful lane towards Wallenrigg Farm; behind us views of the sea opened up and infront stretched the tops of various Lake District passes. Geoff suffered a broken chain, but managed to fettle it enough to carry on and we headed for the opposite side of the valley.

A grassy bridleway took us up the last coll of the day to Yew Bank. Judith spurred on Hilary & myself as we led the ascent ("girly power" apparently), but gate-holding duties stopped the ladies winning the climb. The bridleway turned into a lane that took us all the way back to Torver, straight into The Church Inn (where Geoff and Cary were stopping rather than at the bunk house) where beers and coffees were enjoyed. 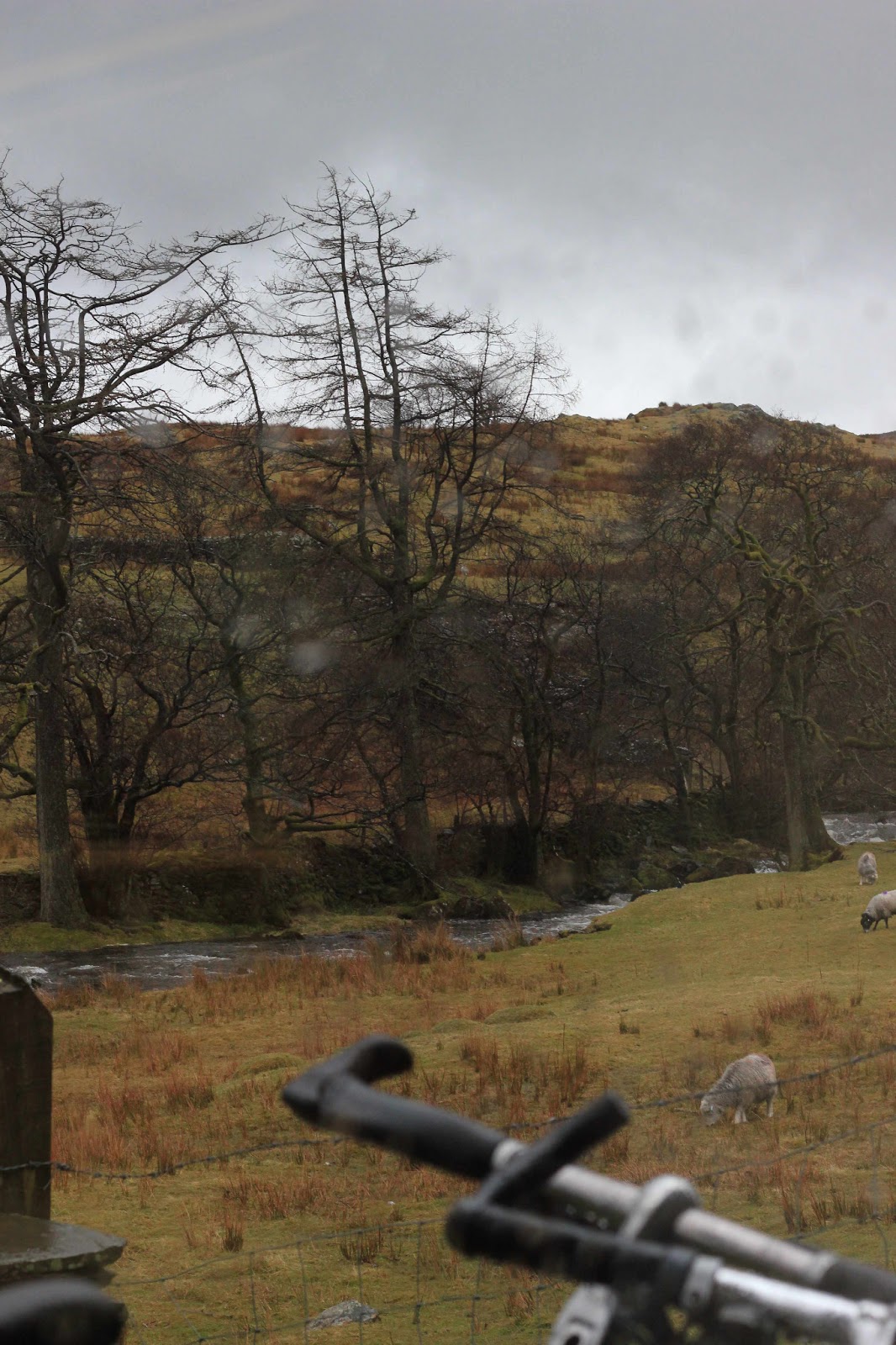 Day Two and despite the forecast for rain, four more members turned up. Tim rode over from Hawkshead to join us with his company for the day.  A heavy drizzle remained with us all morning as we climbed the slopes of Bethecar Moor to the east of Lake Coniston. Again, there was much pushing over rocks and boulders until we reached the tops where we negotiated deep puddles over the peat moorland. Stephen had a slight mishap when his wheel sunk all the way down to the forks. From this point is was downhill all the way through the woods into Grizedale Forest with plenty of technical singletrack that put all our brake-blocks to use all the way to Satterthwaite and onto the lunchstop at the vistor centre in Grizedale.
As we climbed more forest tracks the rain really set in and those with raincapes donned them for the afternoon. By the time we got to the cafe in Coniston village, we were all ringing wet and we certainly steamed up the windows. From the cafe we followed the track beside Coniston and through the caravan sites all the way back to Torver. The track to Tranearth was awash in places and the river, torrential.  As Wednesday evening proceeded, the howling wind turned into gales and the rain thrashed down, I'd expected that the bikes would be blown away through the night.

7am Thursday morning; The bikes were all still in place, and the wind had died down.  By the time we were ready to set off, the rain had stopped. 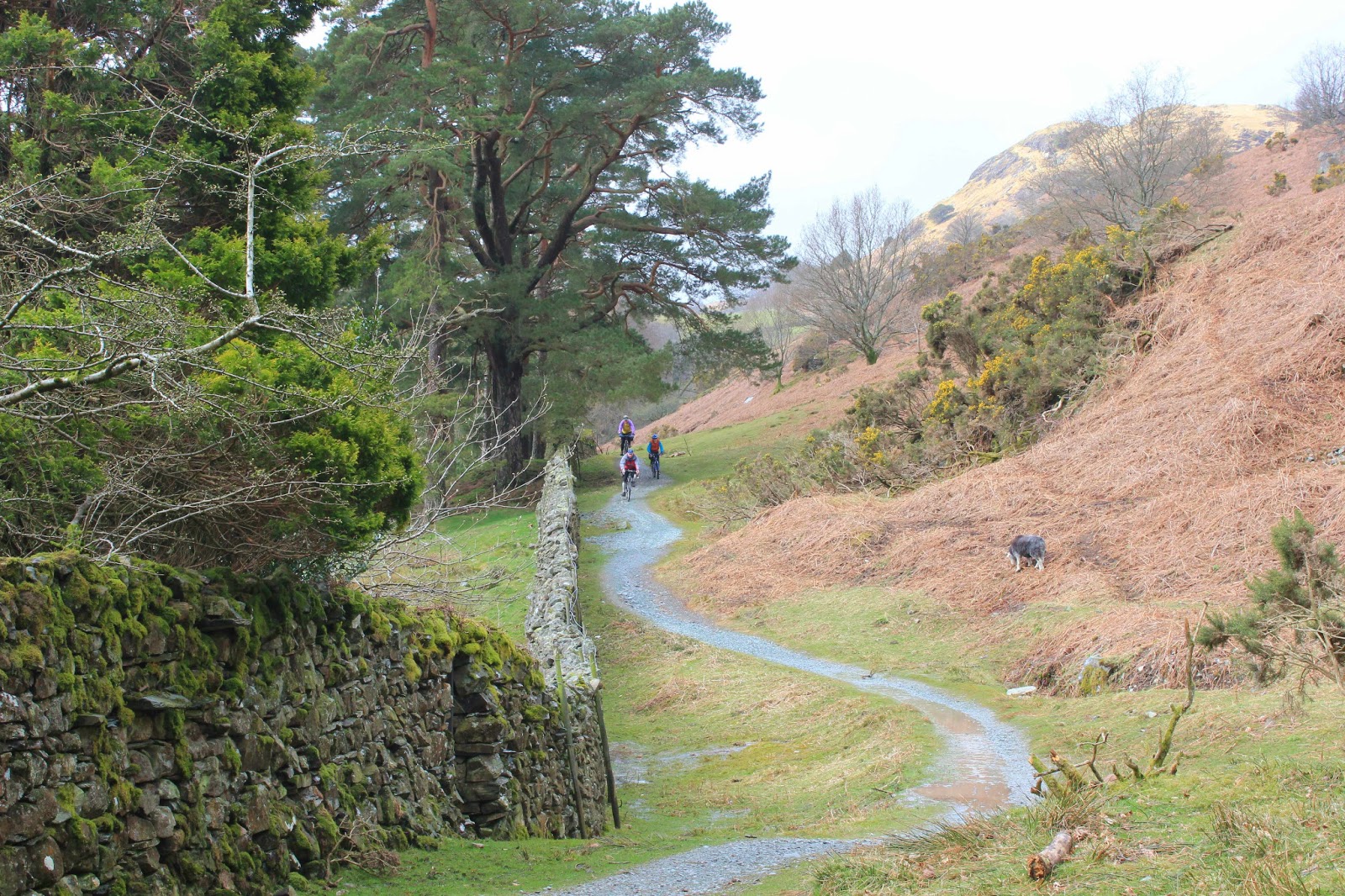 We took the meandering woodland track alongside the Ambleside Road before joining tarmac to climb towards High Tiberthwaite, once more onto rough tracks we headed to Elterwater where a couple on bicycles warned us of the flooded paths by the riverside. 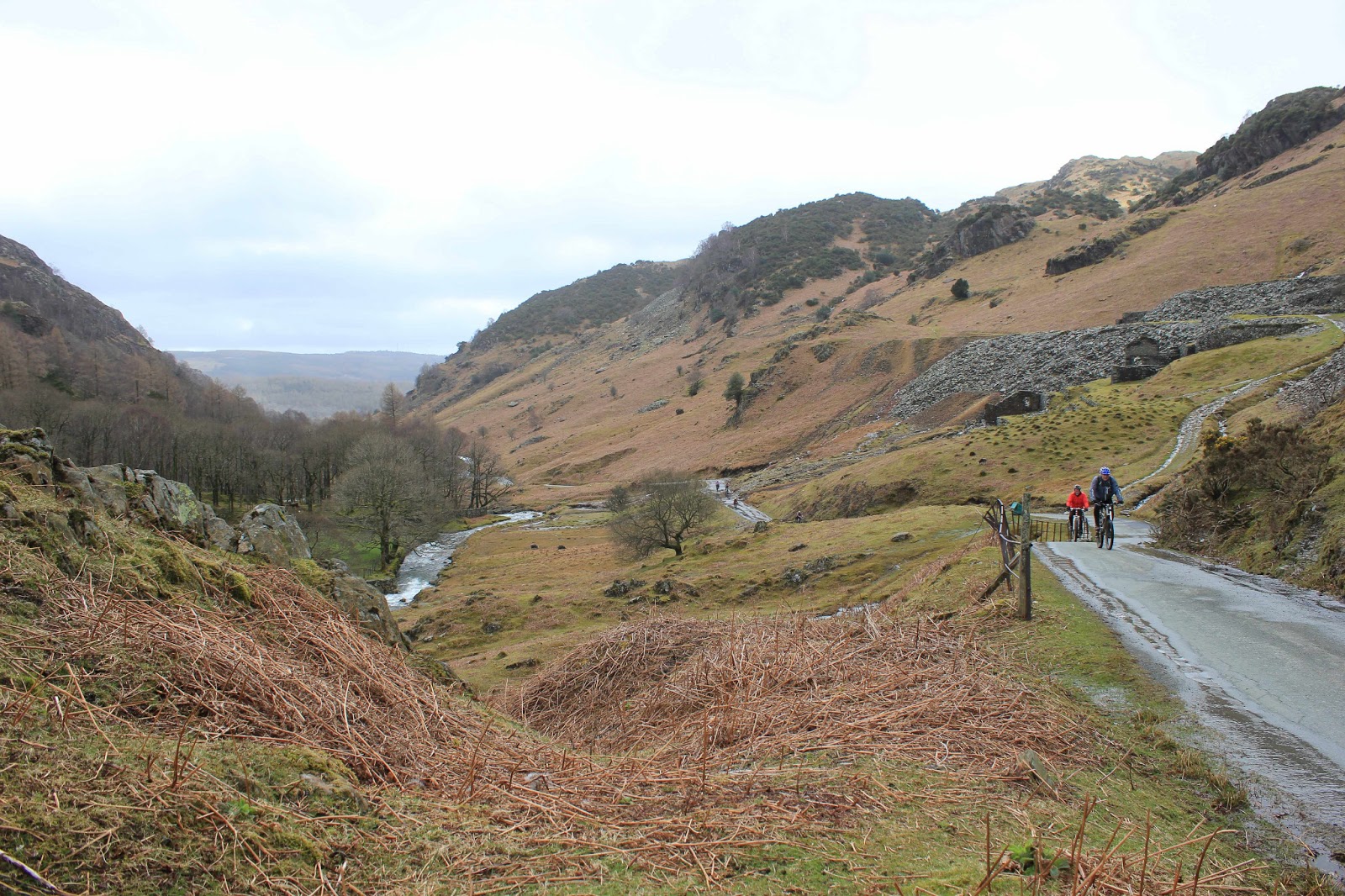 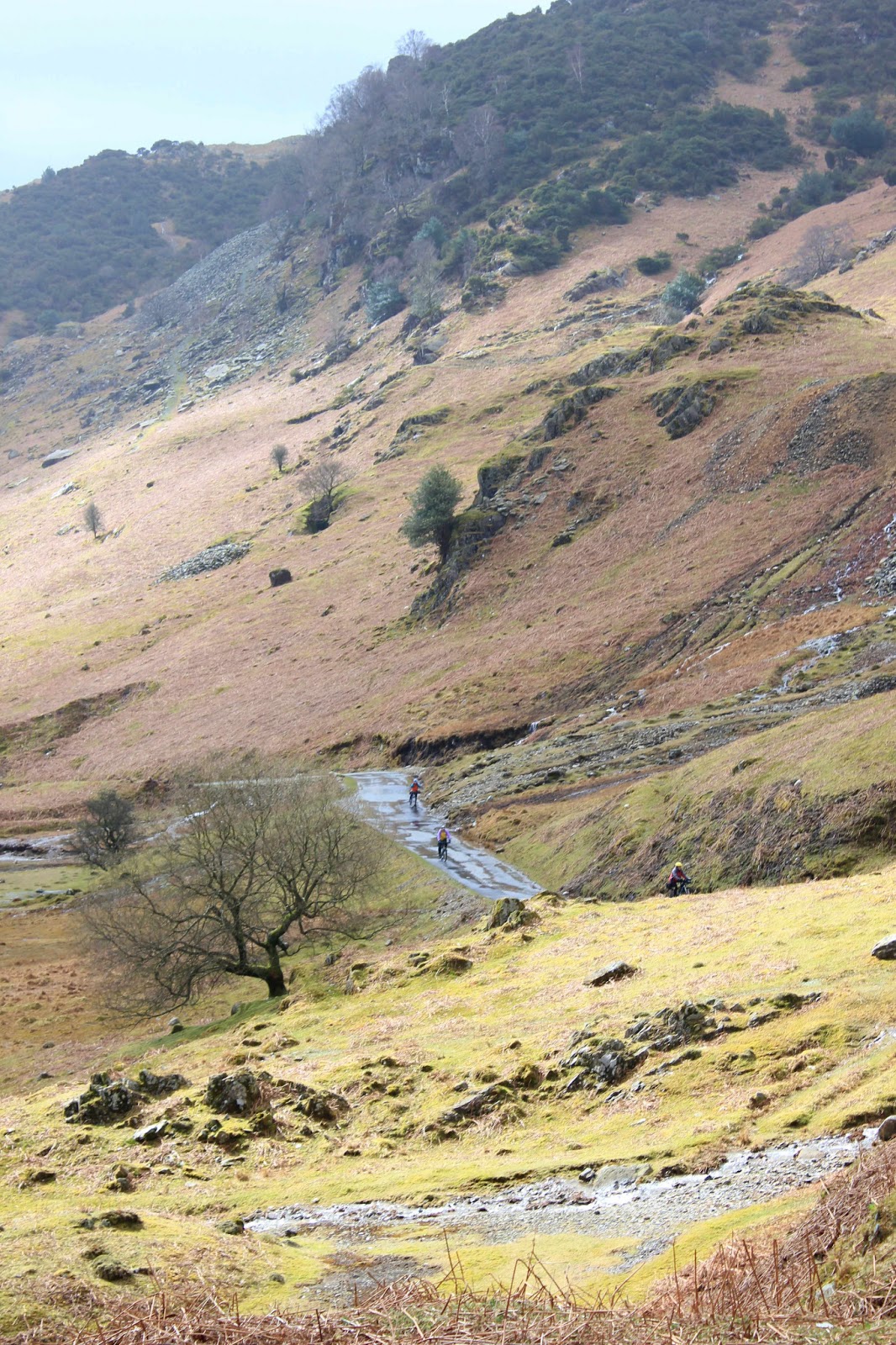 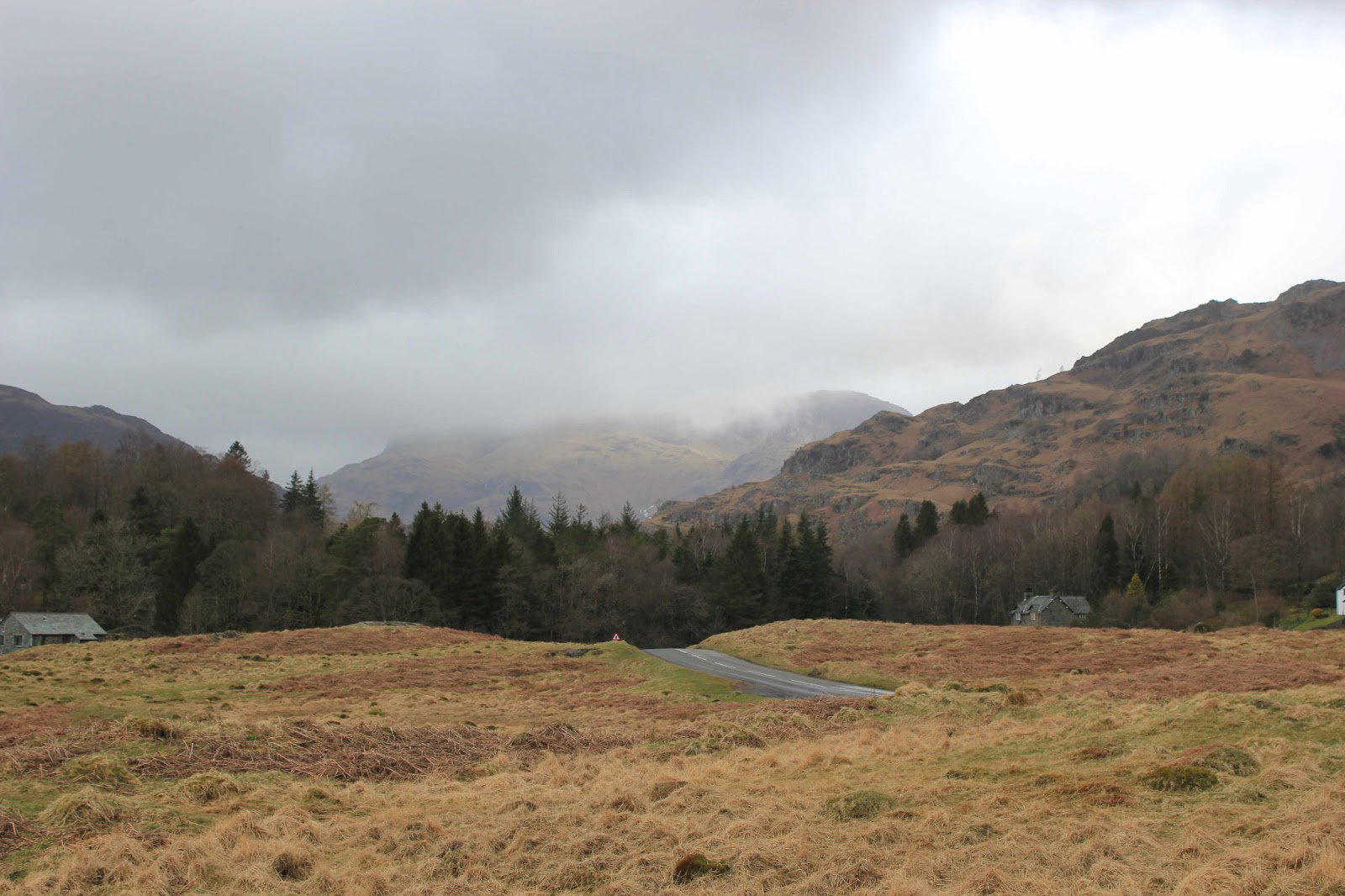 The lunchstop today would be in Ambleside, yet at every signpost that said 'Ambleside' we took the opposite direction as we toured around the valley, eventually joining NCN Route 37 into the pretty town where we all made our own way to various food establishments. 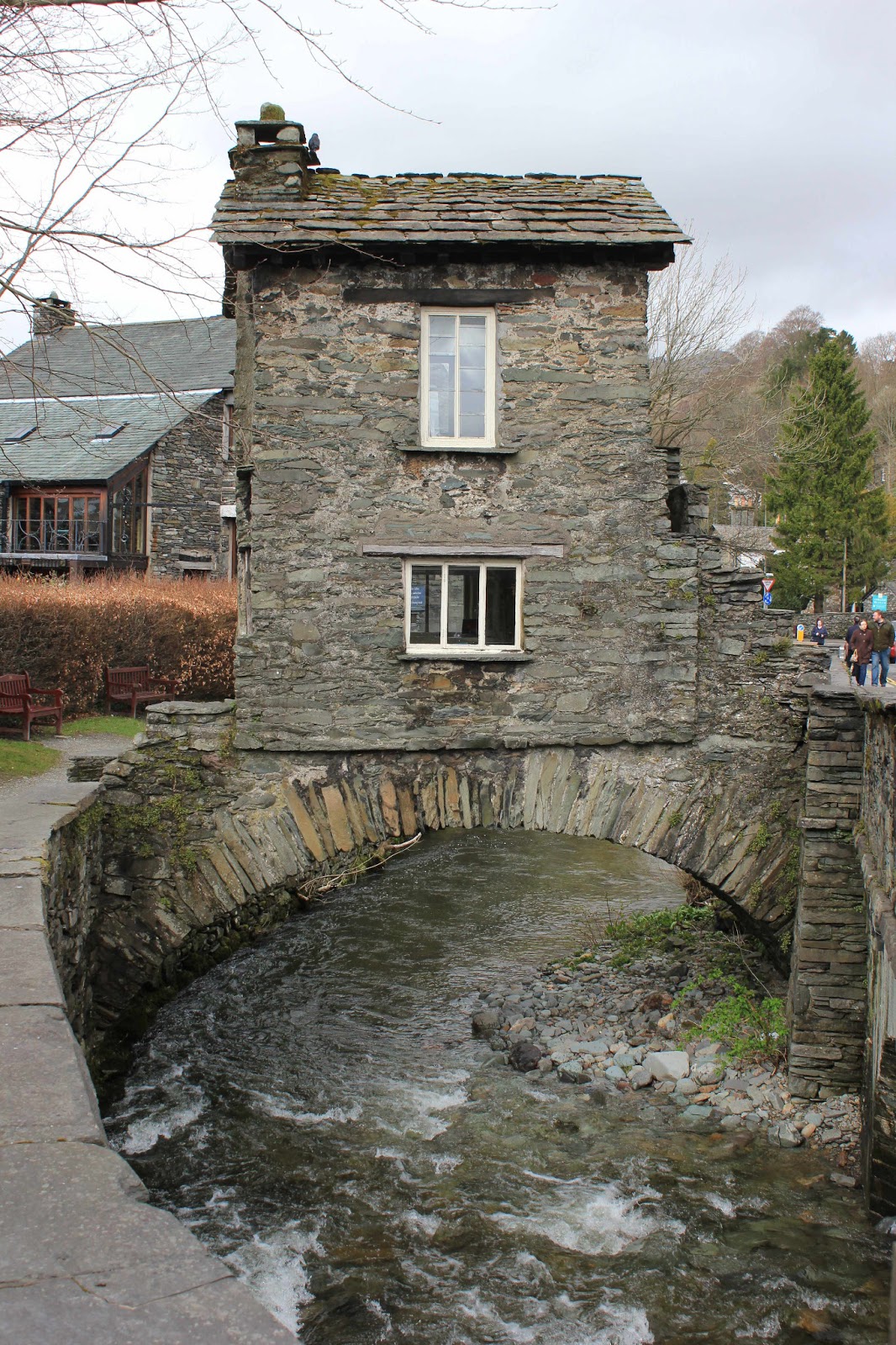 We headed back to Elterwater by road where Brian informed us that the river levels had eased since the morning. There was a vote for 'road & traffic' or 'exploring the wet river path, possibly swimming & no traffic' - in true Rough Stuff fashion, everyone chose the latter option and we all enjoyed racing towards lengthy puddles, lifting our legs up from the peddles and hoping to make it to the other side upright and with dry feet, much to the amusement of some walkers.  Part of the path was completely immersed by the river, most of us traversed the muddy hill, but Ralph and Mike peddled through, undeterred by the deep waters. 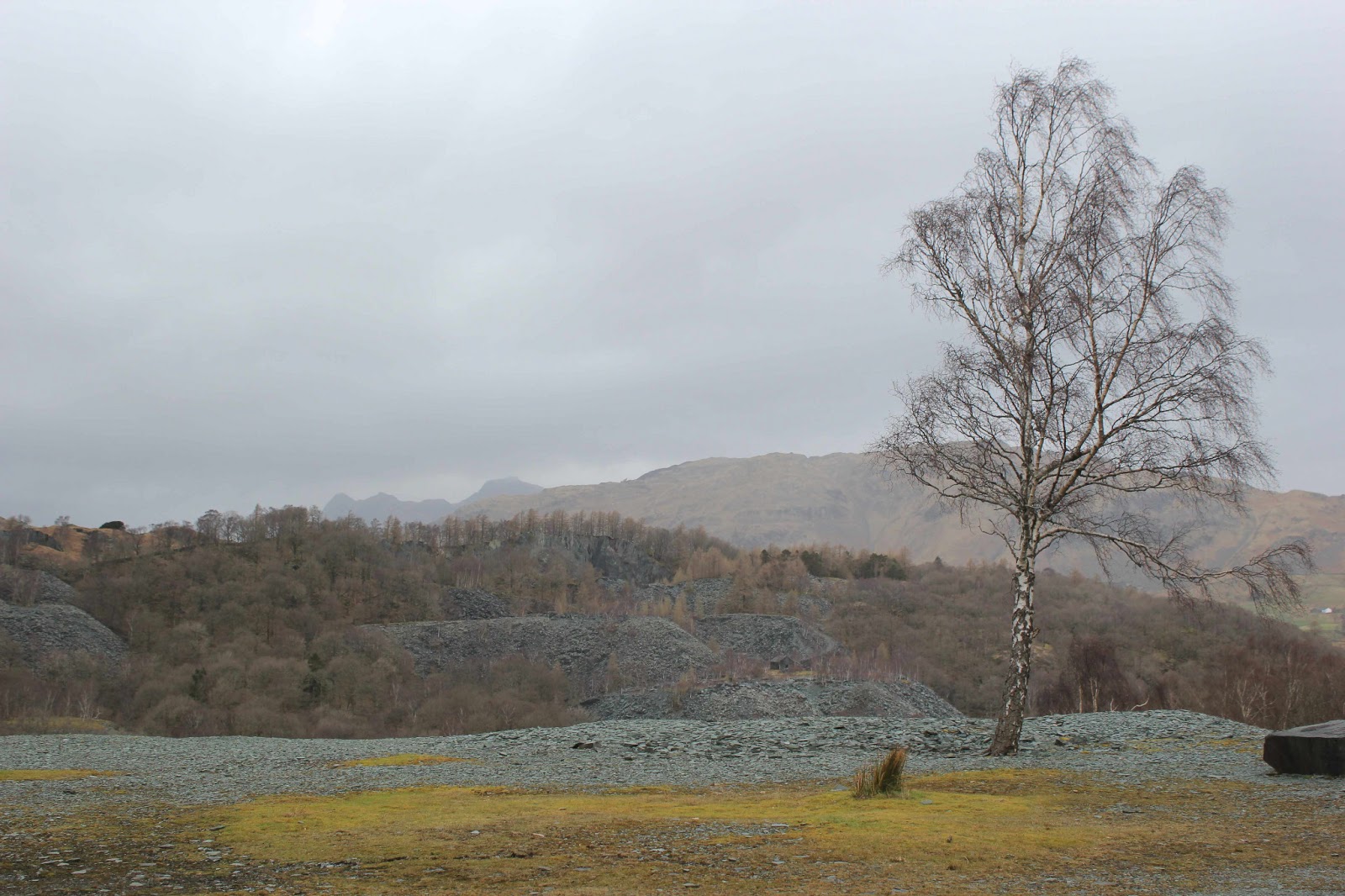 Once again we climbed roads and stony tracks skirting Lingmoor Fell with stunning views of the fells reaching up into the thick clouds. The final significant climb of the day took us up to Hodge Close via Little Fell and the quarry by Holme Fell where Mike stopped to visit a friend. The rest of us enjoyed a fast descent all the way back to Coniston.  Judith bought some beers from the brewery in the village and after a coffee stop, we shared out the beers between bottle cages and panniers to get them back to her car in tact. Once more we followed the lakeside track and the sun came out for this final three mile stretch where some people said their goodbyes before the rain returned. 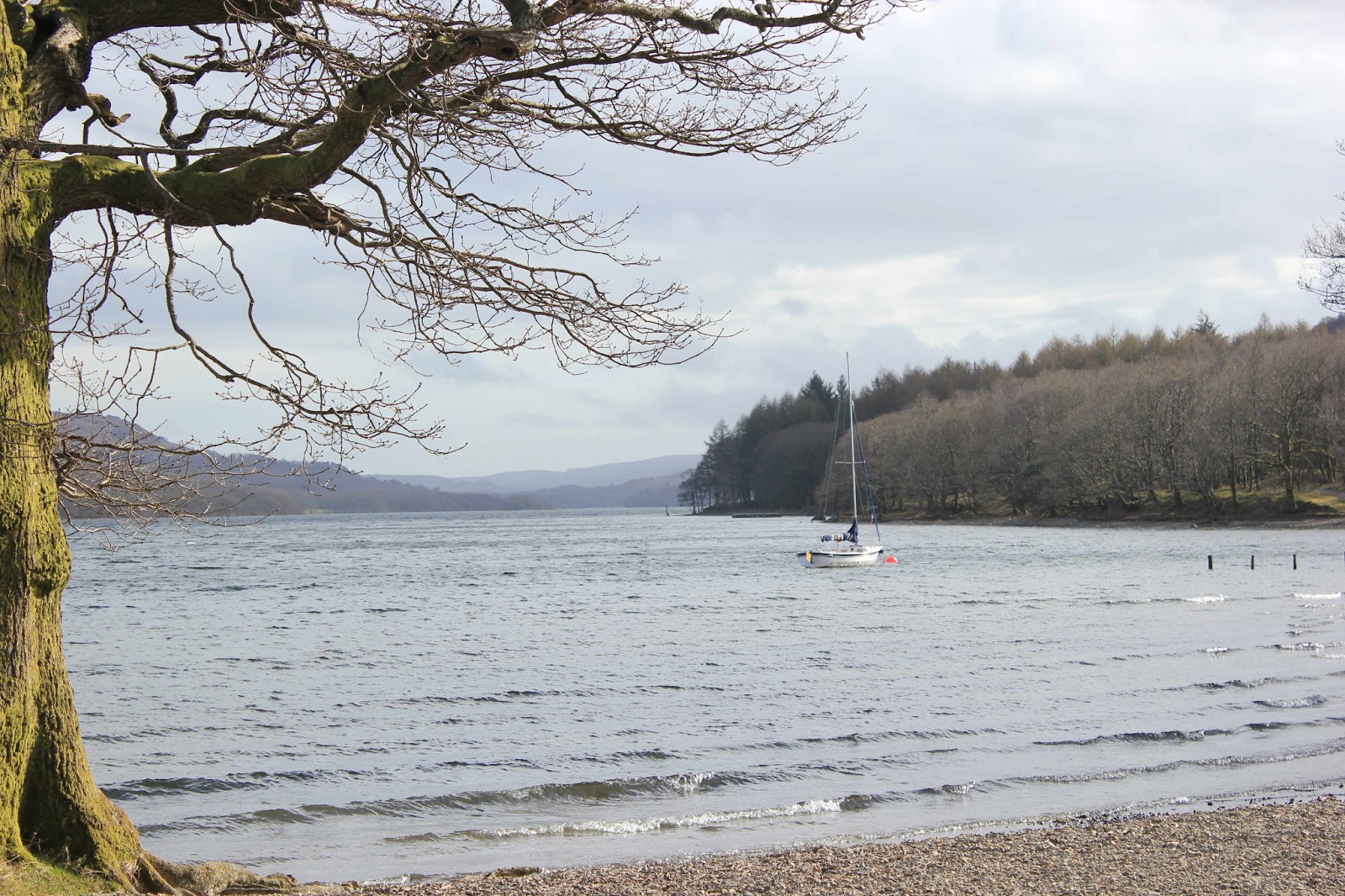 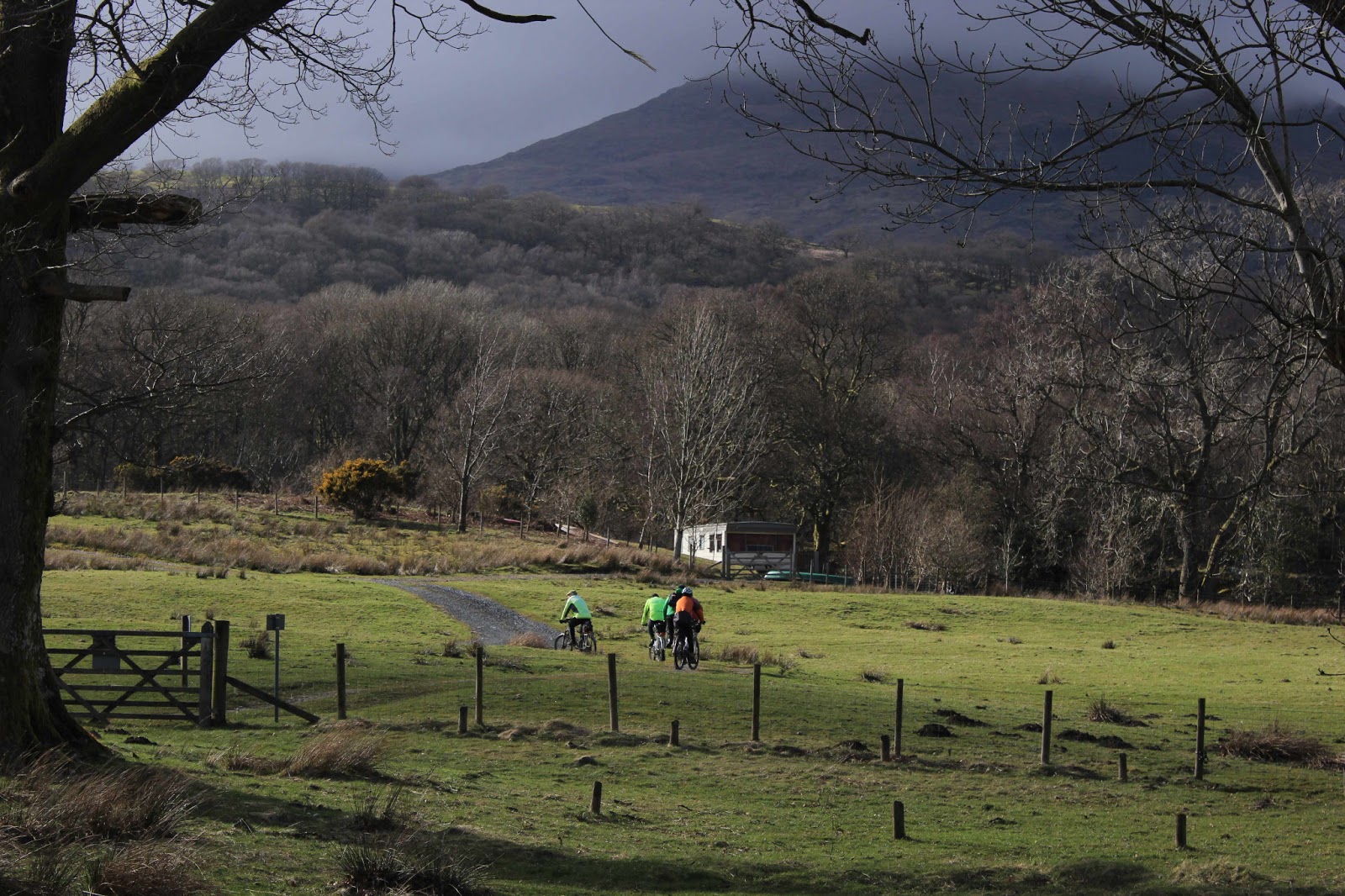 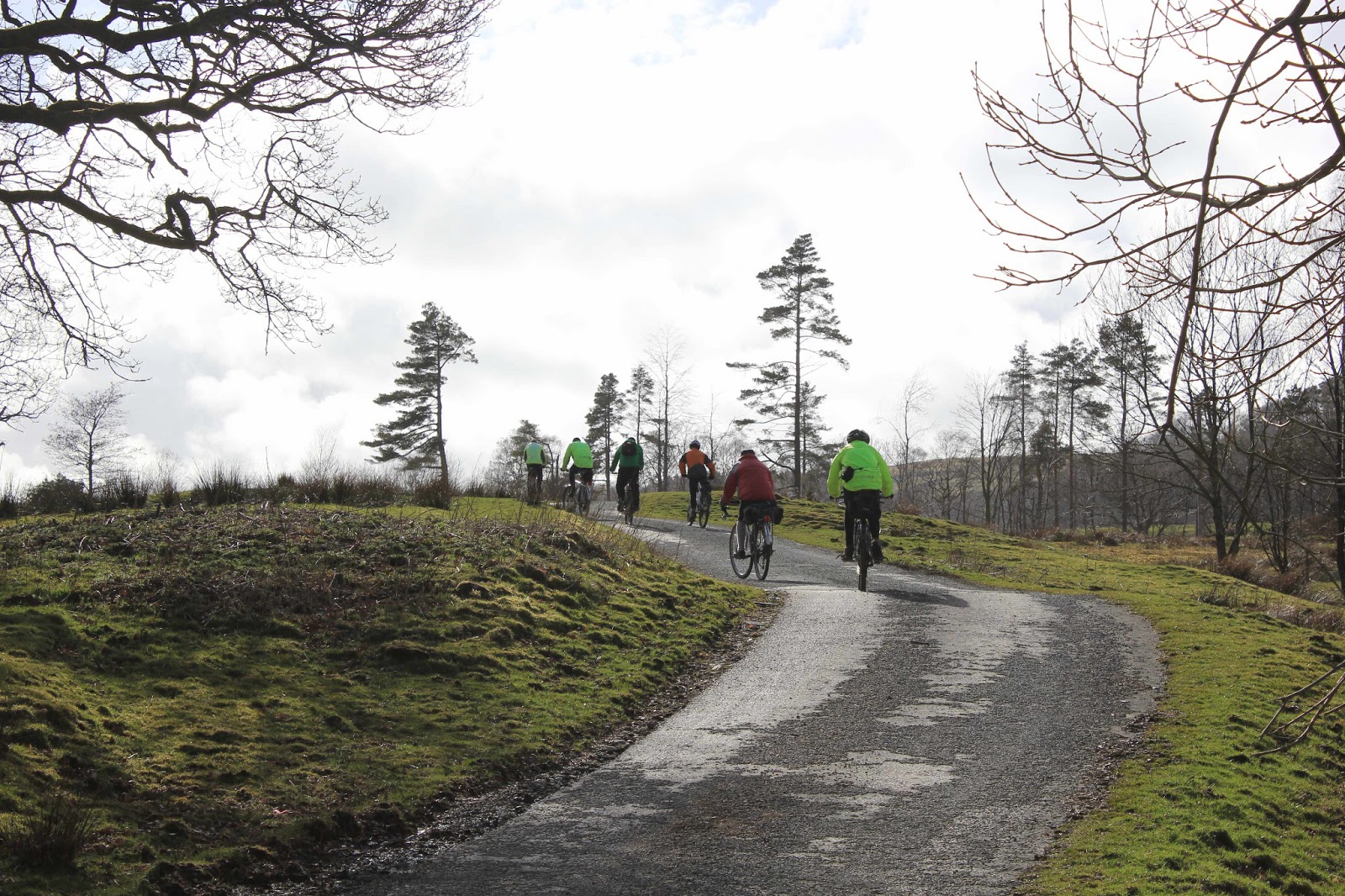 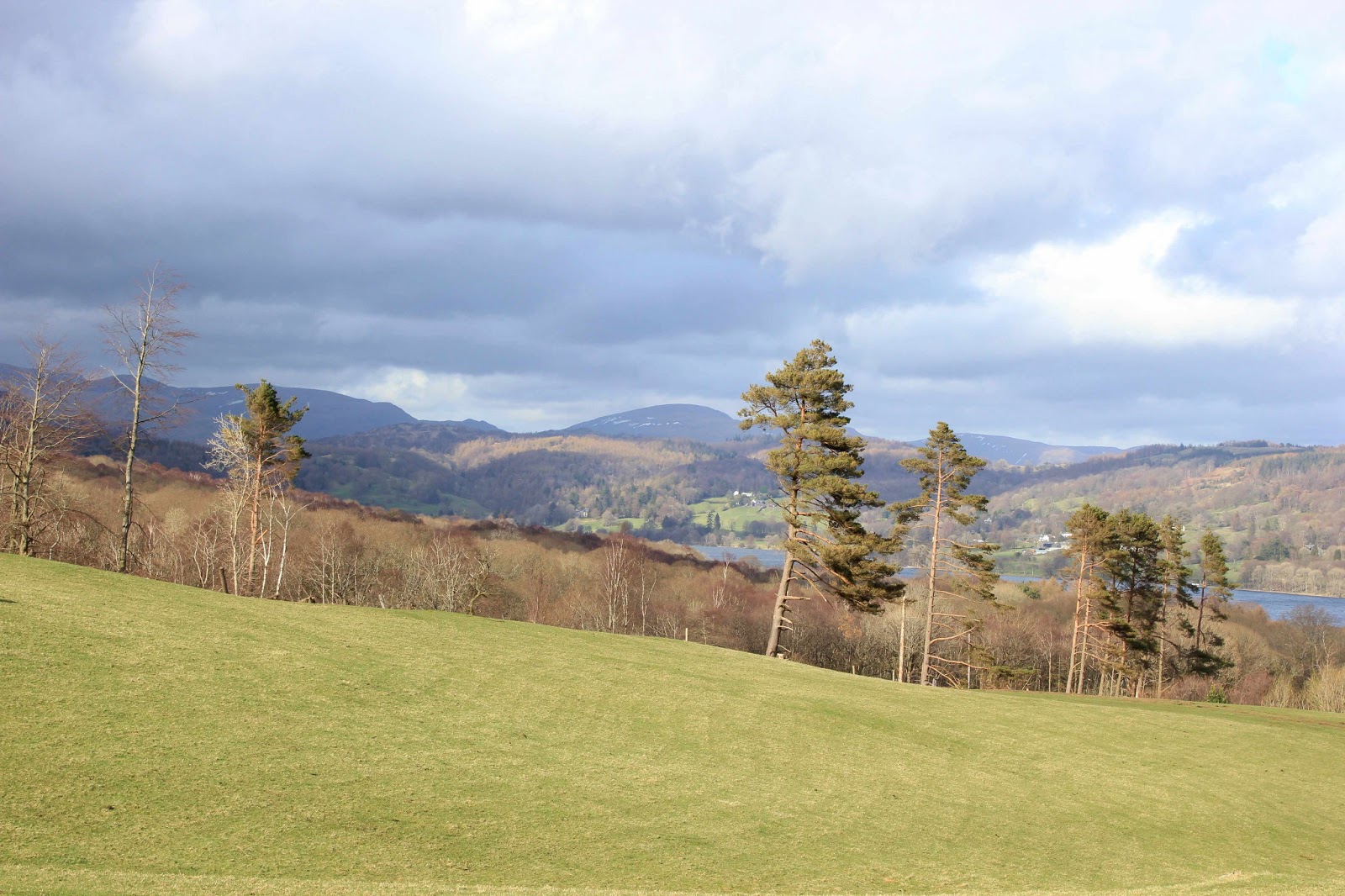 My thanks go to Brian & Mike for leading these brilliant & challenging rides (they came up the week before to try them out when there was still a lot of snow on the tops). It was the best Rough Stuff trip I've been on & I feel like I've achieved a heck of a lot in those three days. Brilliant company of course made it extra special.

When we tried leaving, the rains had been so heavy that my car was stuck in the mud, wheels spinning and digging down. It took Stephen 40 minutes of moving gravel and stones with me slowly edging the car backwards and forwards before we managed to set off driving. Stephen found that his best accomplishment of the week.
Posted by Unknown at 15:08