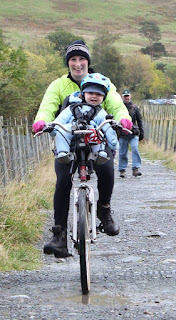 Back in October we enjoyed a brief family cycling trip at Buttermere. It only ended up being one day of riding on account of the weather, but it was a lovely ride indeed. Being out of season, the sole road that snakes through the valley was quiet. We left the hostel and headed towards Honister Pass with a marvelous tailwid. Before the head of the valley, we veered off the road to enjoy our first spot of bridleway riding around Buttermere itself.

Although the road had been quiet, there were plenty of walkers but that was no problem. Lots of jokes about whether we were going to cycle up over Scarth Gap.... not today!

We were round the lake in no time, but it was an ideal time to stop for some food, warmth & to give Frank some time off the bike. The early lunch stop coincided with a bit of rain so it was ideal.

After lunch the next section was on road heading west. The road was lovely with beautiful views, mostly gentle hills and very little traffic. 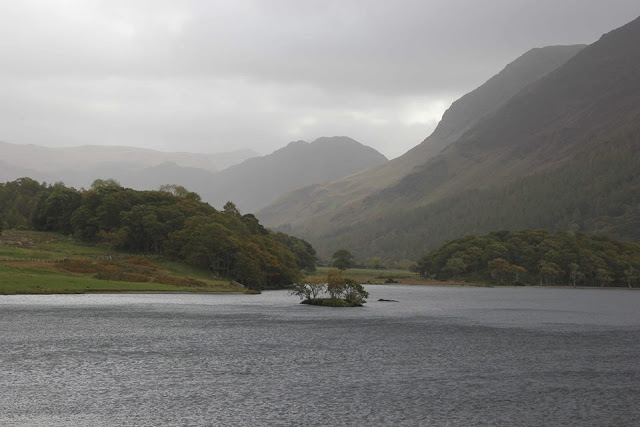 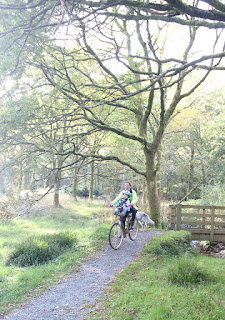 We flew past Crummockwater and at the junction took the south turn towards Loweswater. A few more undulations and one or two sharp inclines (harder with a baby on the front making you lean back so as not to bash your chin), but still completely rideable. Here we were on part of the original C2C route which really made me want to see more of that long distance route another time.
At the far end of Loweswater was a lovely bridleway that skirted the woods and again had stunning views. This was much quieter than the path around Buttermere, although even shorter.

We had a pint & crisp stop at the popular Kirkstile Inn. Frank had a bottle & crawl about before our return journey. 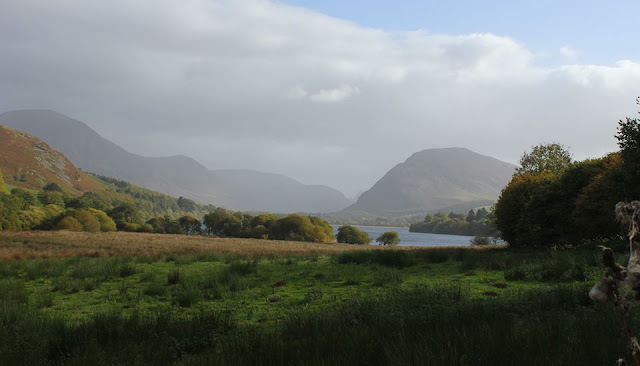 Just over the River Cocker, we took the second bridleway to the right which took us through a lovely wood and cut out a massive corner on the road. It was a fair climb at the start & with pine needles on the floor and no nobbly tyres, I pushed for a few yards. After this it was rideable again all the way back to the road and our return to the hostel.
The loop had been around 18 miles and was brilliant. Without a little one in tow, you could easily blast round this in half a day, but it was nice taking our time and enjoying leisurely stops too.
If I hadn't had a baby on the bike, I'd have added an extra off road loop on around Mosser which would have added a fair bit of climbing.  I'll be back to do that.
A gpx of the whole route I'd like to do can be foud here http://www.rsf.org.uk/2015-04-27-13-59-52/gpx-downloads/category/1-cumbria-the-lakes.html - it's easy to see how to cut the loop out when you view it on the map.
Posted by Unknown at 12:24 2 comments: